New BeanCast Podcast: The One About "Likeability"

It's a good listen, but if you are not so inclined, my take is that it's a smart business move on FB's part, because they will be setting a standard and gathering lots of (valuable) information.

My only question is that I wonder how many people outside "The Bubble" will want to actually "like" things. Particularly because most of the time there's nothing in it for them. (Yes, Pandora can set their playlists more accurately, but not sure that's going to change the behavior of millions.)

And it all goes back to my theory in the previous post that there are many people who are just not hard-wired to share any sort of information on their likes and dislikes in a public or semi-public or even private setting.

This isn't really a huge problem for Facebook-- even if they get 15% of people using the "like" button off-site, that's huge. It's more a question about our assumptions that everyone is a participant, whereas, as one of the other guests (I think it was Mr. Knorpp) pointed out, the 90/10 split you find on YouTube is a more likely scenario. (90% of YT users are consumers, 10% are creators.) 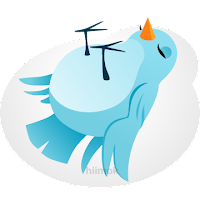 While today’s New York Times describes Twitter’s growth chart as looking “like a hockey stick” I'm starting to wonder if we aren’t at the end of the line in terms of Twitter’s growth. Because four years into it, I can’t but think that the appeal of Twitter is largely based on personality and that the extroverts (and their fans) have already been converted.

Facebook, which in some ways is Twitter’s main competitor, is a lot less immediate and public than Twitter. Meaning that if I am an introvert, I can still put up pictures of my family, get back in touch with old friends, fan my kids school and play Scramble™ without feeling like I am “putting myself out there.” I don’t need to ever update my status, thus avoiding the question of “why would anyone care what I have to say and what do I care what they’re eating for breakfast?” (You can argue all you want about “useful information” and “fascinating feedback” but that is exactly how most unbelievers view Twittter.)

I would also not discount the rear guard action from location based services like FourSquare or Gowalla, which provide a more socially acceptable way of telling people where you are and what you’re doing.

Follow me on this one: with Twitter, you have to actively type in “Having coffee at Westville Mall Starbucks with @SocialBob and @JaneDoe” which, outside of The Bubble, sounds a whole lot like either bragging or oversharing. But if you check in with Foursquare or Gowalla then the apps themselves are doing the bragging for you - you’re just playing along and, if we buy into the hype, allowing friends of yours who are also at the Westville Mall to find you.

So it becomes a more socially acceptable way of announcing where you are and what you are doing-- particularly since the revenue model on LBS seems to be heading towards some sort of monetary reward for checking in (e.g. coupons) and you can’t fault people for wanting to save money. Additionally, people seem to be following a much tighter circle on the location based services due to privacy concerns, and so the assertion that the check-in is aimed at your actual real life friends actually has some validity.

Circling back to Facebook, I’ve started to see something interesting going on there too: people who do not use Twitter putting up status updates that resemble tweets in both their frequency, brevity and currency, but for the fact that they have nothing to do with anything work related. They’re all about movies, politics, restaurants, weather, kids, sports... all the stuff people outside The Bubble talk about. (As opposed to say, the Apple vs Google showdown.) What’s more, they’re getting a lot more feedback (in a threaded and easy-to-follow format) from people they actually know and whose opinions they tend to care about.

And people like Facebook. Or at least they don't hate it the way so many seem to hate Twitter and everything it stands for. It's a puzzling reaction to a fairly innocuous platform, but it's out there.

Now I am in no way claiming Twitter is kaput or that’s going to implode. Just that it’s reached the natural point where it’s got to mutate significantly if it’s going to appeal to a broader group of users.

I can see Twitter easily becoming an indispensable adjunct to other types of web use, rather than its own unique platform. The ability to harness real-time search is pretty powerful, especially if you combine it with the new ad system Twitter is unveiling this week. Together they make it possible for me to see both the latest news about and offer from Starbucks. Which is useful and all, but not really a reason to get someone who’s resisted Twitter thus far to get out and start tweeting.

That’s why Twitter’s future seems to be as a platform where the many consume the output of the few. And while there will continue to be numerous subgroups who use the platform to network and connect with outsiders, the core proposition-- meet interesting strangers by putting your own thoughts. pictures and discoveries out there for others to find-- seems to have run its course. The extroverts are all signed up and the introverts.... well, they're just not interested.
at 1:51 PM No comments:

Consumption vs Creation: The iPad Dilemma

Upon further reflection (and a number of reviews that circle the idea without ever hitting on it directly) it seems that with the introduction of the iPad, Apple is asking consumers to buy into the notion that there are now two types of devices: one for consuming and one for creating. It’s at once extremely logical and extremely radical and it’s definitely something of a gamble.

It’s logical because if you were to start out now, in 2010, with computing being what it is, you would not likely come to the conclusion that the machine you created complex spreadsheets on was also an ideal place to watch movies or read books. And so you’d come up with something just like an iPad to consume media and something like a netbook to create it.

But it’s radical because that sort of set-up is exactly what we’ve become accustomed to and once these patterns are established, it’s hard to break people of their habits.

So the question I have is, what’s Apple’s follow-up act? Is it a netbook type device that runs iWork (and Microsoft Office) and email? That would help people to wrap their heads around the bifurcation and give them a reason to have two distinct and separate devices. Though it would diminish the laptop market and leave these high-profit-margin devices as the province of the tech-focused power user.