A Crack In The Armor 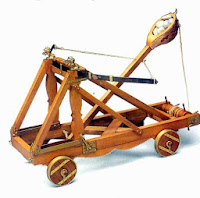 So it turns out one of the most interesting things I heard about during IBC wasn’t happening anywhere near Amstedam, but rather many thousands of miles away in Los Angeles.

Where numerous people have allegedly done the math in their heads and come up with a Hollywood elevator pitch that goes something like this: “House of Cards. Without the middleman.”

The idea is that there’s a lot of talent in Hollywood, but that talent rarely makes it past the gatekeepers. And that networks like AMC, HBO, Showtime and now Netflix have proven that if you assemble the most talented writers and directors in the industry and let them follow their vision, you get award winning shows... and a whole lot of buzz which eventually translates to a whole lot of money. And then Netflix proved that you can put those well-crafted shows online and still get that buzz. To which the next logical response seemed to be “well then, who needs Netflix?”

So the idea is to raise the money to produce a high quality show: top writers, top actors, large production budgets. Only then, instead of selling it to a network (or wannabe network) you put it online yourself. Via a Roku channel and/or a Chromecast-friendly website. Maybe even one of the new on-demand only channels the MVPDs are rumored to be rolling out for non-broadcast content (provided their own cut isn’t extortionate.) And that between those outlets, you can recoup the money you spent producing and marketing the show and then some. By selling subscriptions or advertising or a little of both. With the potential for a lot more, as the long-tail effect kicks in along with overseas licensing deals.

Now to my knowledge, none of this has gone beyond the “taking a meeting” stage. Not that I’d be among the first to know if it had, but it still seems in the contemplation stage.

It’s also important to note that it’s far from a sure thing: you’d really need to get a lot of viewers or advertisers paying a lot of money to make something like this turn a profit. But if you did-- or even if you almost did-- the shockwaves reverberating through the industry would look a lot like Wile E. Coyote after the anvil fell on him.

And we’d all sit and stare at the crack in the armor and contemplate what it meant for the industry.

At least until the next one appeared.
at 11:51 AM No comments:

My latest video on Beet.tv, this one about our Binge Viewing Survey and our white label 2Si second screen platform.
at 8:55 PM No comments:

The results of our Piksel Binge Viewing Survey are in and they're up on SlideShare.
You'll find some interesting conclusions, like the fact that only 11% of respondents watch their favorite TV shows live. Read through the results and share your thoughts.
at 1:16 PM No comments:

CBS Settles With Time Warner. And Netflix Could Not Be Happier

On the odd chance you missed the news, CBS and Time Warner settled their dispute last night, CBS is back on the air, and is being widely hailed as the “winner” in the battle. (TWC Chairman Glenn Britt is even quoted as admitting “we certainly didn’t get everything we wanted.”)

Lots of backstory, particularly around the role of sports in forcing TWC’s hand, but the one that interests me the most is the battle over digital rights , which was a much bigger deal than many realized.

It seems that back in 2008, when the last CBS-TWC deal was inked, CBS agreed to give TWC pretty much exclusive rights to its on-demand programming and, much to Time Warner’s chagrin, CBS did not want to renew that portion of the contract.

So what happened in the interim? Pretty much everything:
While the MVPDs were remiss in not seeing the revolution coming, the truth is, hardly anyone did. As I’ve mentioned before, the one lesson we’ve learned from the digital age is that convenience trumps quality: the music industry did not think anyone would listen to MP3s because the quality was so poor compared to CDs. The phone companies did not think people would use rectangular cell phones they couldn’t cradle between their shoulders and necks for hours.

They were wrong. People prefer convenience.

To be fair to the MVPDs, there were also additional rights issues-- VOD rights vs digital rights-- which impeded innovation. But that’s just an explanation as to why they lost, it doesn't change the fact that they did indeed lose.

So the networks have the upper hand. For now. That may well change though, as the lawsuits spawned by Aereo wend their way through the courts and the MVPDs question whether the networks have a right to charge for retrans fees. Stay tuned.
at 2:20 AM No comments:

Labels: Convergence
Newer Posts Older Posts Home
Subscribe to: Posts (Atom)
Over The Top: How The Internet Is (Slowly But Surely) Changing The Television Industry