So another bunch of fed-up agency creatives, Fallon's Stuart D'Rozario and Bob Barrie, are starting their own shop, perhaps as a way of atoning for the sin of creating a campaign that lured people into the hands of the rabidly Wiccan air hostesses at United Airlines.

And in a statement to Adweek, Barrie noted that

The new agency... will ultimately look to foster collaboration across all disciplines. "We will draw inspiration not from the conventions of advertising, but from the worlds of design, new media, architecture, pop culture and technology," Barrie said in a statement. "True innovation springs from the collision of these different perspectives."

Man, if I had patented that paragraph 5 years ago, think how rich I'd be.

UPDATE: On the other hand, these guys just won the entire United Airlines account, so maybe they're onto something.
at 11:32 PM 1 comment:

No, it's not a science fiction movie about art directors with identical facial hair.
It's what media people call those valleys where they run all the TV spots during prime time.
They've been getting bigger and providing everyone with a new reason why TV commercials are less effective these days. (Not to mention providing media buyers with a reason why you shouldn't have to pay as much for one.)

But as I TiVo'd through my nightly dose of television, it dawned on me that network promos and movie trailers must make up at least 50% of the pod content. So that commercials for everything from Miller Lite to Extra Strength Tylenol are competing against teasers for the next episode of Lost or a trailer for the latest Owen Wilson movie. (Most movies these days feature Owen Wilson, it seems. Don't they?) And it further dawned on me that for most people, the Lost teasers and Owen Wilson movies are far more interesting and relevant than 99% of the product advertising out there.

Which is yet another reason people are tuning them out.
at 11:18 PM 2 comments:

Good old Barb, the thinking person's Garfield, weighs in on the Gap's new Boyfriend Trousers spot and basically echoes the debate Jenne and I have been having all week: delightful commercial; ugly pants.

From the front of the L.A. Times website, one of those stories you can't make up.
at 2:55 AM

Say what you will about the Gap, when they're on, they're on.

And this spot, featuring Patrick Wilson ("Little Children") and Claire Danes ("My So Called Life") is very, very Gap. Now I don't pretend to understand fashion advertising but the Gap seems to have captured that classic Americana space with spots that resemble music videos, what with all the dancing and all. From the "Khakis Swing" to "Audrey Hepburn" to this, they've been consistently on brand and on target. This spot is striking to look at and is instantly identifiable as a Gap ad (even at the gym with the sound and closed-captioning off). Add the up-and-coming stars and the unexpected music and you've got yourself a home run. 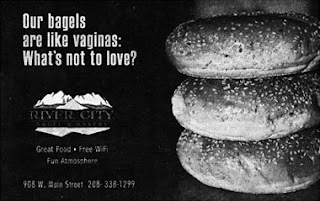 Adfreak's Tim Nudd blogged about this "tasteful" ad done for a bagel place in Boise, Idaho.

Now can we think of any famous, foul-mouthed copywriters who live in Boise, who may have inspired this kind of creativity? 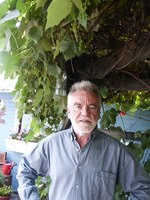 Hey Dude, The Flood's Over

Among the myriad ways the New York Times is out of touch with 99.99% of the population, few stand out as prominently as the pronouncements of their style gurus.

Today, for instance, we learn that

Anywhere a man shops — fashion houses like Gucci, Prada and Yves Saint Laurent; the English-y prep confines of Polo Ralph Lauren and Paul Stuart; traditional Italian luxury houses like Brioni and Kiton; old-school American clothiers like Brooks Brothers and Hickey Freeman; and trendy young lines like Rag & Bone and Trovata — the most popular suit is an elongated and trimmed-down silhouette that is sending other shapes packing (and don’t forget the mothballs).

With slight deviations to reflect taste, the specs of the contemporary man’s suit are as follows: a two-button closure; narrow lapels in a high-notch or peak style; high armholes; narrowly set and thinly padded shoulders; low-waist, slim-cut pants with hems that never quite touch the top of the shoes, daring to bare (just as women first did a century ago) a bit of sock or skin.

The article then goes on to quote some 41 year old screenwriter (because everyone knows screenwriters frequently wear suits) who (and again, you can't make this shit up) likes the suits because:

you can rock sneakers with it, which is what I did for my wedding.

First off, no 41 year old should ever say "rock" when he means "wear" - you haven't been in high school for 23 years, "dawg." (Another word you know said screenwriter uses.) And since when do we care for the fashion opinion of a guy who wears sneakers with a suit to his own wedding. Just to prove how alternative he is.

But let's have another look at the last bit in that first quote "hems that never quite touch the top of the shoes."

In my world, we call those "high-waters" and you mock people for wearing them. So somehow I don't see the great mass of American men shortening their pants to "show a little sock" or even throwing out their 3-button suits to get 2-button ones. As it is, the majority of lawyers and investment bankers I see in my upscale NYC burb haven't given up on pleats yet. And as for the "tight-fitting" part? In case our Timesmen hadn't noticed, jobs that require daily suit-wearing are generally incompatible with high levels of fitness.

In what will strike most people as a desperate attempt to become relevant, both Coke and Pepsi announced plans to launch vitamin-enhanced diet colas this year which they will market as "health beverages."

Seems the Whole Foods crowd has it in their head that Soda=Obesity and has switched to diet green tea and fancy-schmancy seltzers and the like, which is greatly cutting into Coke & Pepsi's profit margins.

Though the whole thing just sounds pathetic, like the marketing equivalent of a mid-life crisis.

First off, I know I haven't been a very good blogger these past two weeks. Combination of illness and subsequent busy-ness. Mea culpa.

Second off-- Joe Jaffe over in Jaffe Juice blogged about a survey done the other day that showed that purchases of brand name items in houses with DVRs were down 12%.

And it got me to thinking about the oft-repeated fact that four of the most successful brands of the past 10 years: Starbucks, Amazon, EBay and Whole Food Market built their brands while doing a very minimal amount of advertising.

Which, I realized is the very reason they succeeded. Because by not advertising, they allowed the sort of upscale consumers who are their core customers- David Brooks' "BoBos in Paradise"- to think that they'd stumbled onto something that the hoi polloi didn't know about.

I suspect most of my readers can relate. Remember that vicarious thrill you got back in say 1998 telling your parents about Amazon. Back when they didn't quite get the whole idea of the internet. Or being surprised that your clients in Cleveland had absolutely no idea what Starbucks was. (Let alone a half-caf skinny latte.) And this feeling of superiority, this sense that you were part of this elite group that was on to something, was enabled by the fact that none of these brands did any real mass advertising.

Their message was, instead, spread by word of mouth, by the press, who wrote about them incessantly, and by the pop culture zeitgeist that associated these brands with a particular stripe of hip urbanite. The lack of any discernible advertising meant that these brands, initially, were an insider's secret, inaccessible to the masses. I mean imagine if Starbucks had run a hundred million dollar national campaign with some target-appropriate celeb (Tarantino? Uma Thurman?) plugging their coffee. You wouldn't be caught dead there. It would have been way too mass-market, way too uncool. I mean they were trying to sell you this shit and you weren't going to be sold.

So the question is, have we entered a new era of advertising awareness, where upscale, educated consumers reject messages from advertisers because they're sophisticated enough to see through them, no matter how clever or on-target they are? And if so, how do we in the business, respond to that?

(NB: I'm well aware that all of the aforementioned brands do some seasonal and retail advertising, and that eBay now runs a national campaign. But none of them used mass, brand advertising to build their brands initially nor do they run advertising at the level their more established competitors do.)

Been a super busy week and I've been bad about posting.

Caught about a half hour of the Oscars-- just enough to hear Michael Arndt, who won the award for Best Screenwriter, tell the zillions of viewers out there that the cross-country trip his family took was one of the "funnest" things he'd ever done.

Generations of English teachers are spinning in their graves.
at 11:38 PM No comments:

Labels: Buzzword Of The Month Club
Newer Posts Older Posts Home
Subscribe to: Posts (Atom)
Over The Top: How The Internet Is (Slowly But Surely) Changing The Television Industry