Privacy advocates have gotten Facebook users attuned to the idea that not everything should be shared with everyone. So many, if not most, Facebookers have changed their default settings to ensure that their birthday party photos are shared with their friend list rather than the (default) entire world and some have even gone the extra step of creating distinct groups of work contacts, family members and the like.

Which makes it not the anti-Facebook, but the anti-Twitter.

Because Twitter is all about sharing everything with everyone. Particularly people who don’t know you. At all. Which is one of the things that causes certain people to have such a visceral reaction to Twitter: this notion that someone would give up all notions of privacy willingly, rather than because of an easily-corrected flaw in the technology.

Now the good news for Google and Twitter is that there is likely room for both. Right now use of the various platforms is largely based on one’s degree of tech savviness and willingness to be an early adopter. But as these social platforms become even more ubiquitous, I think we’re going to start selecting them based on what fits with our own personalities.

This often overlooked fact - that we are unique beings who feel more comfortable in some situations than others - is going to be a big factor in the future of social platforms. People will start to spend more and more time on the platform that best conforms with their sense of how much a person should share with the outside world. And it seems as if there will be a continuum, with Twitter and Google Plus each grabbing one side of the privacy line and Facebook in the middle.

I’m not seeing an either/or situation: plenty of people will be active on all three. But like the old chocolate, vanilla or strawberry ice cream dilemma, they’ll always have a favorite among the three.
at 9:53 AM No comments:

A Few Words From Our Sponsor 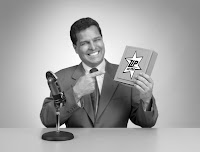 Tell most brands that their users are looking for "content" and their eyes light up at the prospect of being able to once again send out "push" messages, because to them "content" clearly means "all that stuff we want to tell consumers but can't because we're supposed to be having 'conversations' with them." (Today's euphemism for that is "storytelling" as in "we've got a story we want to tell you... regardless of whether you actually want to hear it.")

The savvy strategist will guide them past this momentary lapse and explain that by "content" they mean something the consumer can actually make use of, something that their broader audience is actually interested in learning about, often in a PBS/Bravo kind of way.

At which point the brand will inevitably turn to Senior Vice President X, who was part of the team that invented the nuclear widget, the greatest advance in widgetology since 1983.

Which is, in and of itself, not a bad idea, since people really do want to hear from Ms. X. The problem though, is the Ms. X is a brilliant engineer and a horrible writer.

As are most business executives. This is not intended as a slam on executives, but snazzy, journalistic style writing is no more a trait needed for success in business than the ability to run triathlons.

The obvious answer is one too many brands miss out on, primarily because it involves spending money (and everyone knows that social media is free!) And that answer is to hire a journalist - there are certainly a multitude of out-of-work ones-- and have said journalist put Vice President X's words into sparkling prose.

Now this is something that PR agencies often claim to be able to do, but they have self-interest - they're an outside vendor, and the journalist should ideally be working directly for the brand, interviewing staffers, becoming intimately familiar with the industry and, above all, creating "content" - stories and videos - that are (at minimum) as good as what's being put out by the industry trade magazines.

But that's not the hard part: brands have been hiring out of work journalists for decades. The trick is to take those articles and videos and put them out there in a way that gets the broader community talking about them. They should be conversation starters, not conversation hoggers. Get people talking about a topic, but give the community members, the people who really care about the topic, a forum to express their views and opinions.

Because Senior Vice President X, she's already famous. She's not looking to make her mark on the world. But all all those people who spend an hour or so a day on the message boards? They're still looking for a way in. And if you give them something to talk about, something that lets them show off their ideas and thinking, you've done a whole lot of storytelling.

It's their story, of course, not yours, but I don't think that's really a problem.

Labels: Your Brand Is Not My Friend
Newer Posts Older Posts Home
Subscribe to: Posts (Atom)
Over The Top: How The Internet Is (Slowly But Surely) Changing The Television Industry