I was on a panel this week at Digital Hollywood on 2nd Screen, and Sirpa Aggarwal from Arktan was kind enough to supply me with two nicely edited video clips.

Also featured in the video are Rahul Aggarwal from Arktan, Marc Scarpa from Simplynew and Amaury Blondet from Discovery.

Monopoly Is Not Just A Board Game

Late last year, I wrote about rumors I was hearing that GAFA (Google/Apple/Facebook/Amazon) had come to the conclusion that the only way they were going to be players in the TV industry was to control their own chunk of broadband access. The thought was, why would NBC sell them rights to content given that the deal would only serve to annoy Comcast or whichever MVPD owned the broadband connection to the end user’s TV. And the way they were going to get their piece of the broadband pie was by convincing Congress that the monopoly the MVPDs had over broadband access in the US was a grave threat to the principle of net neutrality and thus a threat to free enterprise and everything else the American people held near and dear.

So imagine their delight when the confluence of events over the past month has set that very chain reaction in motion. With nary a cent spent on L Street lobbyists.

First, the DC District Court rules in favor of Verizon, declaring the FCC’s current net neutrality rules to be in violation of the Communications Act. And while the actual takeaway was just that the FCC needed to rewrite the rule, some of the mainstream media—and many of those on social media-- seemed to think the court had effectively nullified the entire principle of net neutrality and was giving the MVPDs carte blanche to overcharge innocent Netflix users.

Then came the Comcast/Time Warner Cable merger, which would create a cable behemoth capable of reaching 57% of the U.S. population. And even though (or perhaps because) Comcast never competed with Time Warner for broadband subscribers, the red flags went up again: Comcast was going to control broadband access in the US. They could change the fee structure at will, especially now that net neutrality was out of the picture.

And the drumbeat grew louder still.

The final twist was the announcement last week that Comcast had worked out a commercial interconnect agreement, which, as analyst Dan Rayburn convincingly explained, was a paid peering agreement that had nothing to do with net neutrality. This troublesome fact did not seem to deter many observers who saw Netflix paying Comcast for delivery and declared net neutrality cooked and done.

The panic over net neutrality plays into the current national gestalt that the rich and powerful are happily screwing over the 99% and the government is doing nothing about it. You can see it in everything from Bill de Blasio’s runaway victory in the NYC mayoral election to protesters harassing Google busses in San Francisco. And so the dawning realization that broadband access is, at best, an oligopoly, at worst a monopoly, has now got the public’s attention. Fear that the formerly open internet will suddenly be available only to the highest bidder has left many scratching their heads and wondering why the government doesn’t do something about something so clearly un-American.

There are actually many good reasons for the government to pay attention to broadband. A free national WiFi network would be a huge boon to the economy and put the US way ahead of much of the rest of the world. Unfortunately the same government who built the Obamacare website would be in charge of building this free national WiFi, so be careful what you wish for.

Which brings up plan B, the one that GAFA is allegedly hoping comes to pass: the government decides that Broadband circa 2014 is a lot like Telephony circa 1982 and brings an antitrust suit (or some variation thereof) against the MVPDs and breaks up the monopoly. It’s something that’s easier said than done: would new competitors be required to lay down their own cable? Would existing cable be available by all competitors who’d compete on price and service alone? What about the fiber optic cable that Verizon and (recently) Google have installed? And will all this be obsolete because 5G mobile signals will be strong enough to handle video and data traffic.

Regardless of what happens, the mainstream media has gotten the scent of blood and stories like Comcast/Netflix are going to be hitting the news on a more regular basis as carriers work out deals with content providers. What happens as the sharks circle around is anyone’s guess, but watch as politicians on both the left and the right stake out positions on this to pander to voters who are generally fed up with the current state of the TV industry. Or at least the size of their monthly bills.
at 1:35 PM No comments:

Ellen's Selfie: Whose Win Is It? 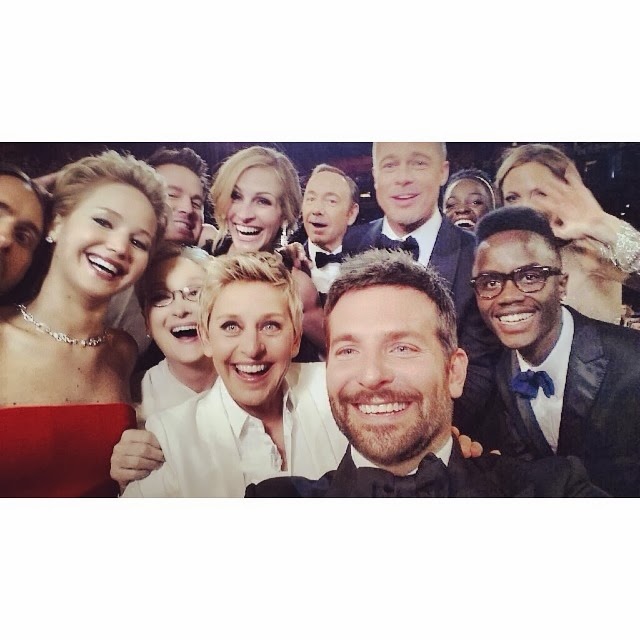 So Ellen’s Twitter selfie (taken by Bradley Cooper) has broken all sorts of retweet records and the usual suspects are claiming a win for Samsung.

But is it? To quote my friend Todd Walker (on Twitter) “the brand attached to that selfie is Twitter. Not one person's gonna remember what phone was used.”

The brands that will garner a win from this are (in order) Twitter, the Oscars, Ellen, Bradley Cooper. Meryl Streep, Brad Pitt, Julia Roberts, Angelina Jolie, Jennifer Lawrence, and then, maybe, Samsung.

So step one for the brand would be to get their PR people in gear and make sure they're attached to the moment.

Is this a replicable moment that proves the overall viability of social TV? Not really. The confluence of a widely viewed live broadcast (e.g. no time zone issues) with celebrity presence and a Twitter-heavy audience makes it more of a one-trick pony that's a great example of the power of real time marketing and the speed at which something can go viral.


Which is not to say it’s not a win for Samsung. It’s a great idea and far more powerful and buzzworthy than any of the TV spots on the show. But without the direct brand tie-in (and competition from Twitter and celebrity brands, it's not the win 1 million plus retweets would make it seem it is.
at 11:41 PM No comments:

Labels: Buzzword Of The Month Club, Convergence, Social Media Is Only Social If You're Alone, Social TV
Newer Posts Older Posts Home
Subscribe to: Posts (Atom)
Over The Top: How The Internet Is (Slowly But Surely) Changing The Television Industry