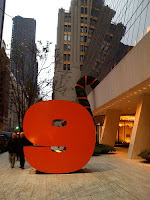 With a hat tip to the BBH Labs blog for inspiring this, here are my Top Nine Blog Posts from 2009, in Lettermanesque reverse countdown order:

9. "BORN DIGITAL" (July) A look at how the perpetually wired preschoolers of the Bobos are the first generation we can say was truly "born digital."

8. "DON'T SUCK" (July) Why having a good product or service is the best defense against social media blunders.

7. "CROWDSOURCING IS JUST CREATIVE GANG-BANG 2.0" (September) How certain ad agencies see the crowdsourcing trend as a way to recreate the creative gang-bang for free.

6. "LIFE IN THE BUBBLE" (November) A look at how and why the majority of social media users are observers rather than active participants.

5. "MAGIC ADVERTISING WORDS" (September) On why many marketers still cling to the outdated notion that the right ad can blind consumers to their product's shortcomings.

4. "THE END OF CREATIVE HEGEMONY" (September) Why the Mad Men era creative department, of the sort still in power in most traditional agencies, is no longer relevant, and what creativity will look like going forward.

3. "DOES CREATIVITY STILL MATTER?" (February) A look at the role of "creative" advertising at a time when consumers increasingly rely on search for product information and where it does and doesn't make a difference.

2. "THE STUBBORN, MULE-LIKE TENDENCIES OF REACTIONARY THINKING" (October) Why most marketers and agencies have a tough time accepting all the things that "we" accept as the converntional wisdom, and how and when they'll catch up.

1. "THE SHELF LIFE OF REVOLUTIONS, PARTS 1 - 3" (January/March) A psycho-economic historical overview of twentieth century marketing trends and how we wound up where we are now in the Era of Customer Service.

How To Lose A Customer: Citibank Mortgage


We've had the mortgage on our house for seven years and, thanks to an automatic payment system, the mortgage has been paid ahead of schedule every single month.

This month, however, Citibank Mortgage managed to somehow lose track of the payment. (Our bank has records showing that it was paid and money was transferred on the usual date.)

The harassing automated calls began sometime last week (we were away) and continued through this morning... despite our getting on the phone 3 different times and speaking with someone at Citi Mortgage who claimed they'd rectify the issue.

This morning we received another automated call, this despite the Citi mortgage website showing that we are actually paid up through February 2010.

Another call to Citi Mortgage, another profound apology. (Based on the South Asian accents of the people we spoke with, I can only but assume we are actually speaking with a call center in India and not anyone in any position of authority.)

So here's what I don't get:

1. Why, after 7 straight years of prompt payment, would they feel compelled to immediately subject us to 4 harassing phone calls a day over a payment that, if it were late (it wasn't) would only have been two weeks late? I can understand if we were consistently late or if we had a funky adjustable mortgage. But we don't. Wouldn't a polite call or note asking what was up been the smart thing to do?

2. Why has no one in a position of authority with Citi Mortgage called to apologize? It's not like they're the only game in town and in the midst of The Great Recession, good customers are hard to come by. Harassing a good customer over the holiday for an error of your own creation seems like just the sort of circumstance a "we're very sorry let us make it up to you" letter calls for.

One of the great things about the digital era is that we can record shabby service for posterity and I firmly believe that it will eventually catch up with the perpetrators. Good customer service is often seen as wasteful because it requires real humans with the power to make decisions exercising subjective judgment rather than computer programs acting on a set of pre-programmed variables.

The problem is, in the long run, the latter is always going to prove far more costly.
at 11:10 AM No comments:

The Art of Conversation

People often talk about how Twitter is great at conversation, but the majority of folks I know rarely experience it as anything other than a one way street.

But sometimes a great conversation does happen, most often spontaneously.

The attached PDF is a loose transcript of a conversation that broke loose for about a half hour involving 18 people the other night based on a simple tweet I put out asking whether David Armano's accepting a position at Edelman said anything about the struggle between ad agencies and PR agencies for control of social media. (And since there was no hashtag involved, I'm sure I missed out on several side threads that took off.)

It took on several interesting tangents, and while I know most of the participants in real life, I did get to meet some new people as a result.

Which is why Twitter proves so addictive.
at 10:45 PM No comments:

The Downside of Clever

One of my pet peeves are ads that try too hard to be clever and wind up ignoring the product and audience.

To wit: this morning I saw an all-type bus shelter ad for J.C. Penney that read "For the record, no kid wants a sugarplum."

Clever line, will likely win some awards and the creative team will proudly display it in their portfolios.

But what does J.C. Penney get out of it?

If my own reaction is common (and I suspect in this case it is) my thoughts immediately turn to Hanukkahs past and my dismay at receiving clothing of any sort as a present instead of toys. Which then immediately leads me to Toys'R'Us or GameStop or Amazon or even Target- any store that I know sells lots of toys-- and how I should make sure all my kids' gifts are toy-like.

J.C. Penney sells clothes as far as I know. And while the website indicated that they do sell toys (I just checked) they've given me no reason to choose them over the aforementioned stores: the ad tells me nothing about the size of their toy selection or even that one exists. (Or if it does, I haven't noticed it after about a dozen viewings.)

Clever is good and can help create a strong brand image, particularly in a parity category.

With apologies to Dave Armano and Mike Arauz, the masters of the chart, it struck me the other day that there's a world of difference in how we judge most websites vs most ads and that the inability to wrap their heads around this sea change is the one thing that holds so many brands, people and agencies back. 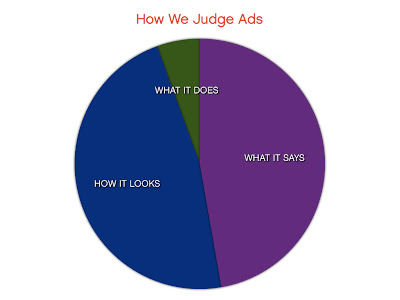 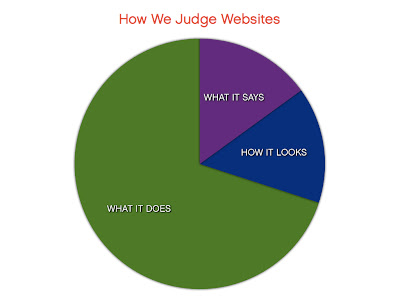 The Decade Without A Name

So what do we call the decade that's about to be behind us in around three weeks?

No one's been able to come up with a universally acceptable name.

I've heard everything from "the two thousands" to "the zeros" here in the US, while my friend Ben Kay tells me that the Brits are referring to it as the "oughties" (this is the same pattern that has them referring to garbage cans as "rubbish bins.")

None of those names really seems to have stuck though and we'll soon be looking back upon a nameless decade.

This is no doubt causing a great deal of angst in the rapidly depleting hallways of People, Time, Newsweek, the E! network and other places prone to running cover stories featuring "the decade that was" type retrospectives.

But what about the advertising and marketing communities. Certainly someone here can come up with something clever.

There’s an ongoing debate in the ad world about the death of the “Big Idea” - an overarching notion like “Just Do It” or “Got Milk?” that defines a brand in its advertising messages.

The gist of the argument is that the current media landscape makes the Big Idea obsolete and that the best notion is to create lots of little ideas which will coalesce into a Big Idea depending upon consumer’s reaction.

And while there’s much truth to that argument (which has its basis in what’s now commonly lumped under the umbrella of “Design Thinking” ) I’d like to present another possibility, which is that brands need Big Ideas and Bigger Ideas.

A Big Idea is a marketing message, designed to get consumers to try a product or service. These messages are often very granular and brands and ad agencies often spend weeks tweaking the brief or the tag line to create what they feel is the exact perfect combination of words. And while much of this fine-tuning is no doubt pointless, having a unique message is quite valuable when you’re faced with parity products in a mature market and brand image is the sole differentiator.

But orienting your web messaging around the sales-oriented “Big Idea” is a mistake. Consumers encountering your brand online didn’t just stumble upon it: they took a decisive and purposeful action in order to land there. So you need an idea for this gray area that defines your brand without being overly “sell” oriented.

Consumers, as many of us tend to forget, don’t think like marketers. Which is to say they aren’t that keen on the fine distinctions and you’re lucky if they can keep one large idea about your product in their heads.

That’s why, you’ll want to cut back on your sales pitch: your message is different and all you need to keep in mind is what your core proposition is, the Bigger Idea that sums up where you sit in consumer’s mental map.

So while the marketing line on my Pert Shampoo may read “Crazy Good Hair Without The Craziness,” your Bigger Idea is “Pert = Convenience” Not particularly sexy, but the Bigger Idea is never going to be couched in pretty marketing language. It’s flat and consumery, but if you can own "convenience" in the shampoo category the way Volvo once owned “safe” you’re golden.

Once you’ve gotten that Bigger Idea down, you can start experimenting, adjusting all your smaller ideas, provided they map back to the Bigger Idea in some way or another.

It's an easy plan to put in motion and eliminating the need to force fit things like mobile apps into the constricted logic of some marketing speak tag line will only serve to make everyone's life easier.
at 1:49 PM No comments:

Labels: The Real Digital Revolution, Your Brand Is Not My Friend
Newer Posts Older Posts Home
Subscribe to: Posts (Atom)
Over The Top: How The Internet Is (Slowly But Surely) Changing The Television Industry