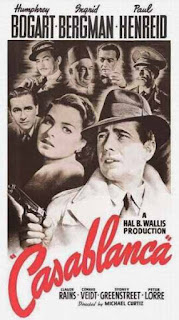 Apple does a lot of things right, but iTunes video isn’t one of them. I’ve rarely had a smooth experience with the service, and my recent experience shows they’ve not gotten any better.

With Hurricane Sandy approaching, I decided to rent Casablanca after my kids noted they hadn’t seen it.

So I downloaded it to my laptop, as I’m able to plug that directly into my FIOS router and get a faster connection.

All good... until I decided I wanted to watch it on my iPad.

I plugged the iPad into the laptop, opened up iTunes and dragged the unwatched movie into the iPad line-up. It showed up on iTunes, but when I unplugged the iPad, the movie did not show up.

Thinking there might be some kind of WiFi connection needed to make the transfer, I logged both the iPad and the laptop onto my iPhone’s hotspot (we had no power and thus no wi-fi at that point.)

Success (I thought) - the movie showed up on the iPad and I started to play it. In order to save the remaining charge on my iPhone, I turned off the personal hotspot on my iPhone... and the movie quit... at which point a message popped up telling me that “the rental period for Casablanca has ended.”

And that was that. No way to get the movie back. No way to watch it on the iPad other than re-renting it.

That’s just 101 and it’s amazing that Apple still gets it wrong.

If they’re going to be the system of the future, they’ve got to get simple stuff like that right and work out the whole seamless thing. (The Apple TV doesn’t do a great job with video either  - there are too many times where I can’t play something from the iPad on TV because of nebulous “rights issues.”

Ditto movie rentals: why can't users renew their about-to-expire rentals the way they do a library book? Especially given that the window is only 48 hours.

Apple is in a great position. Steve Job’s willpower created a company where users immediately assume that any problem with the product is a result of their own failure, not Apple’s (“I shouldn’t have had so many apps open... then the battery wouldn’t drain so fast.”

But if they want to take the lead in TV interfaces, they need to rethink the experience they offer.