Prom King Brands And The Evolution of 2nd Screen 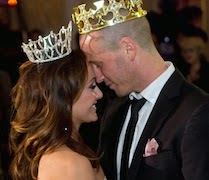 Seven years ago, I wrote a piece called “Your Brand Is Not My Friend” that talked to the fact that there are only a handful of brands “cool” enough that people actively seek them  out on social media. The other 99% of brands have to provide something of value to get people to pay attention to them.

What makes a Prom King Brand? It is, as the saying goes, a certain je ne sais quoi, but the easiest definition is a brand whose logo people will unironically wear on a cap or a t-shirt. So Nike. Starbucks. Apple. Plus sports teams. Colleges. Musicians. And of course, TV shows.

There’s a certain cool factor to TV shows that most brands just don’t have. So that people will engage with their accounts on social media and play around with their second screen apps. It’s not a little off for an adult to admit to being a fan of Homeland (especially this season) and therein lies the opportunity for brands to introduce an alternative to interruptive advertising (those 30 seconds commercials that have become increasingly jarring the more we rely on services like Netflix and Amazon that don’t have them.)

A branded promotion around a TV show— and that could be everything from sponsoring a companion app that allows viewers to play along with a show like The Voice, your basic Twitter promotion contest during the season premiere or an full in-show integration the way Dodge did with Defiance— will get traction from fans of the show and the brand will gather the halo effect of being associated with a Prom King brand. It’s a way to get consumers to pay attention and think good thoughts about your brand. When executed correctly, it’s also a way to get them interested in learning more about your product, either because it’s the prize for the competition or because you’ve positioned it in a way that makes them understand the connection between your brand and the show and why you’ve got something they might be interested in.

As second screen grows, along with the rich (and measurable) data that comes with it about who the viewers and fans are and what they’re doing online, it will become more of an integral part of the show’s production, with showrunners and their staff creating  experiences that feel organic to the show. That means networks will begin working more closely with advertisers to create unique properties for them, something that harkens back to the early days of television when brands worked closely with showrunners and networks.

I’m not sure interruptive advertising will ever totally go away. But for brand looking to stay on its customers good side, branded second screen experiences should provide a viable alternative.