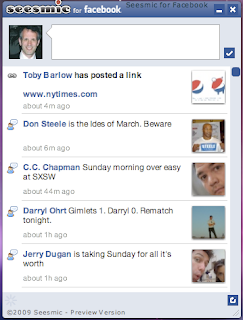 So yesterday at a crowded SXSW panel hosted by Facebook's Dave Morin, Loic Le Meur, founder of Seesmic announced what could well prove to be a Twitter killer: A free-standing Twhirl-like app for Facebook updates. (Sound familiar?)

Now at first glance, the app has much less functionality than Twhirl: it's just a reader with no mechanism for replying to anyone within the app. (Clicking anywhere on a post opens a browser window that takes you to Facebook.) But since it's being called a "preview version" perhaps this functionality is forthcoming.

It will be interesting to see how and if Seesmic is adopted. As I've noted previously, Facebook is about talking to friends while Twitter is about talking to strangers. For the 50 million plus relative tech un-savvy people who have joined Facebook over the past few months, the former sounds like a much more compelling proposition. It will, however, mean a behavior change, as frequent status updates are not part of their current lexicon. If they can get past the initial hang-up that this sort of behavior is narcissistic, then Seesmic may have a real Twitter-killer on its hands.

UPDATE (3/17/09) Tweetdeck introduced a pre-beta version that shows Facebook updates alongside tweets and allows you to send selected tweets to Facebook as well, a feature I've been wanting just about forever. It will be interesting to see if the two can live in harmony like that: many of my friends have all their tweets sent to Facebook, so it can feel a bit like stereo. If people start getting more selective about what goes to Facebook, then that will change too.
at 9:10 AM