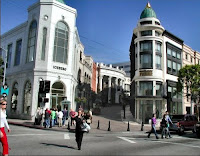 As Twitter announces plans to make location-based tweeting an option and as FourSquare continues to take off amongst the digerati, I’m reminded that there’s still a goodly number of people who view EZ Pass (the computerized toll-paying system) as a true invasion of privacy.

It’s possible they have a point.

The promise of location based social networking has advertisers all but drooling. They’ll be able to target consumers in context with ads that are relevant and timely.

The typical example given by boosters is that a consumer who posts that they are getting hungry can quickly be hit with a coupon from a nearby restaurant they’ve eaten at in the past, or where their friends have eaten in the past.

And that all sounds well and good: it’s lunchtime, I’m hungry and Green Garden Wraps, one of my favorite restaurants, shoots me a coupon. What could be better?

If I don’t know where to eat, I can see where my friends have eaten and when I announce I’m going to The Parkview Diner, I’ll find I’ve been sent a coupon for first time customers..

The problem starts however, when I start getting coupons from ten other restaurants. All of which I’ve (purposely or accidentally) given permission to. Some of which aren’t even particularly local. (Don’t think that’ll happen? Just look at the physical junk mail you get. And unlike emails, those letters cost cash money.)

Advertisers can’t be trusted to exhibit restraint. Certainly not all of them. And it’s not their fault: there will always be agencies and other practitioners who’ll encourage them to more or less spam customers. Because you never know when someone might want to drive 25 miles for a hamburger, right?

So rather than wind up with a useful system that provides me with ads-I-want-when-I-want-them, I now have a system that hounds me based on where I am rather than just where I live. I mean it’s not too hard to imagine some nightmare world where I sit down to breakfast and my computer starts trying to convince me to have Corn Flakes instead of Special K, and didn’t I really want a Chiquita banana with that?

An unlikely scenario, of course, but so is one where advertisers all act responsibly and with as much respect for the consumer as possible.

(And speaking of location, I'll be off on vacation at a very nice beachfront location next week, so catch you all the week of the 30th.)
at 2:44 PM

Labels: Buzzword Of The Month Club, The Real Digital Revolution