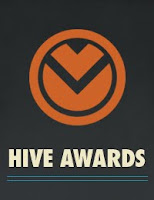 The Hive Awards are now live!

The Hive Awards started as a pipe dream, about a year ago, when I was looking at web award shows and realized that none of them rewarded things like user experience, content strategy or even coding. At least not on any significant level. What’s more, the awards that were being given out seemed to go to big, high profile sites in glamor industries. Which is not to say that those sites weren’t deserving, just that they didn’t seem to reward all the people working in the trenches, what I called the unsung heroes of the internet.

And so an idea was born.

When I pitched the idea to International Awards Group, they immediately understood the value of such a show and agreed to work with me to develop it. Together, we came up with the name Hive Awards as a paean to the “hive mentality” inherent in building a web site or application. There are many people with many different roles, all of whom must work together and build off what the others have created. It is only by cooperating and working together that they’re able to create the final product. Our show recognizes that dynamic and seeks to reward each function within the hive.

We’ve also divided up the different job functions by industry category. Because we realized that the content strategy for an entertainment site is always going to be a whole lot sexier than the content strategy for an insurance industry site. By allowing each industry category to be judged separately, we’re leveling the playing field and giving everyone who's done something unique and special a chance to be recognized.

Finally, we see the Hive Awards as a chance to help set standards in the industry and to give newcomers something to strive for. The interwebs are still so new and evolve so quickly that having something to point to and say “this is what good work looks like” should prove very useful.

Since this is our first year (and in keeping in line with the notion of “hive mentality”) we’re looking to our audience to give us feedback and suggestions. (If I was the type of guy who liked using buzzwords, I'd call it "crowdsourcing.") So if there’s something that doesn’t make sense or you feel could be made better, please let me know, either here or on the Hive Awards site.

Discount Deadline ends December 31st, which is sooner than you realize, so start working on those entries.