The Obligatory Post-F8 Post: They Did It For The Kids 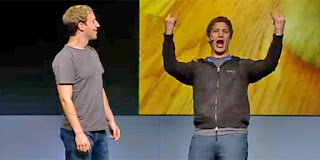 WHAT’S IMPORTANT: The new features are too advanced to be readily adopted by the Boomer demographic that dominates Facebook. But they're innovative enough to make Facebook relevant again for their kids.

Music Sharing: Not as seamless as you might think: Facebook’s pitch to Spotify, Rdio et al is that they’ll get them more paid subscribers (for which they will likely get some sort of commission.) That means that users actually have to download the app their friend is listening to and have it open. While Facebook prompts for this, it’s a hassle,  and the whole notion of synchronized listening that Zuck was going on about in his keynote is bunk: songs start playing at the beginning, not at the point where your friend is. Or was, as the case may be, since if you can find it on someone’s news feed, you can listen to it.

Nonetheless, this is going to be a very appealing feature for high school and college students, who are (a) much more likely to share musical tastes with their friends. (b) far more experimental with their musical preferences and (c) often likely to define themselves by their taste in music. Boomers will likely find the handful of friends with similar tastes and glean from each other.
The key here, as on all the auto-sharing services, is going to be how much control you have over whose log-ins are being aggregated and what the cut-off number is before Facebook thinks you should take notice. These are adjustments you’ll need to make unless you don’t mind the safest, most mainstream content making its way to your News Feed. (The odds that at least three of your 500 friends will listen to a Lady GaGa song is far greater than the odds that three of them will listen to something from say, Jonathan Richman and the Modern Lovers.)

Video Sharing: This is a lot more integrated than music sharing. The Hulu app, anyway, since Netflix won’t be available in the US for a while. You don’t need to leave your browser (or Facebook) to watch, and Hulu Labs has created a great collection of social tools.

My one caveat here is that there’s no bookmarking feature, which is important because long form content is rarely a spur-of-the-moment decision. At some point there will be enough mass to use Facebook as your go-to recommendation engine, but for now, the likely MO will be to go to Hulu and see what new shows your friends have been watching. There are plenty of apps (Clicker) already that do that with a range of OTT video options, but only around shows and movies people have actually bothered to “like” or check in to. Which brings me to:

The Verb Thing: While Facebook may see a clear distinction between “is watching” and “likes” I’m not sure the average user will. The new “frictionless sharing” functionality takes away any incentive to “like” or “recommend” something on one of the Instant Sharing sites, unless the site adjusts its UI to accommodate it. This, along with auto-sharing may may a lot of sharing useless, particularly if it seems that most of what’s showing up there is random, e.g. people leaving Spotify on all day at work, forgetting it’s on and playing the same list over and over. Facebook also records sampling, so if I watch the first two minutes of a 3 hour movie, my friends see the same listing as if I’d watched the entire movie.

Timelines: As a friend (somewhat) jokingly noted, Timelines are a huge boon to Facebook stalkers. Since the vast majority of Facebook’s users have been on the site for less than three years, filling in the Timeline is going to be a long-term project akin to scrapbooking.

Younger users will have the wonderful scrapbook-of-my-life that Zuckerberg was kvelling about, but it’s unlikely most Boomers will try and fill in those 40 some odd pre-Facebook years. Facebook seems to acknowledge that, since many of the pre-sets on their timeline app are on the order of “got my license.”

And no matter how old you are, Timeline is still essentially a really nicely designed old photo album, the sort of thing it’s fun to look at a couple of times a year, max. So the key here is going to be the above-the-fold functionality: the ability to see which songs and movies and articles you’ve spent the most time with recently, where you’ve been checking in, etc.

Facebook has pages for things like music and video too, so you can see what you and your friends have been up to, nicely laid out as a series of charts. It’s a great feature, but ultimately confusing: Facebook had conditioned users to go to the News Feed: your profile was where you went to make sure the post with all the typos really did get deleted. But now Timeline is suddenly very functional and it’s unclear whether the preferred experience is going to be: there or on the News Feed?  And then there’s the:

Ticker: This is the third place I might actually find my preferred experience and it’s going to make get people to waste a whole lot more time on Facebook. At least initially. I can see a lot of people deciding to hide it after a month or two. The problem right now is there’s no easy way to edit what shows up there and from who. Besides which, unless your friends are particularly active and/or numerous, your News Feed stories are going to be pretty similar to your Ticker stories. Which could be remedied if Facebook had done a better job with:

Friend Lists: The problems with this are so typical of Facebook’s IT-Department-Circa-2003 mentality: they will do everything for you, their way, and only after a lot of people complain do you actually get the ability to make adjustments. Here, their magic list-making machine often creates a bunch of empty, duplicate and/or useless lists and there’s no way to delete them. (You can hide them, but that’s going to be beyond a lot of users’ skill set.) Besides which, it only serves to obfuscate the fact that there are just two lists that matter: Close Friends and Acquaintances. Putting someone in either list alters the frequency with which they appear in your news feed, and there’s even an option in the privacy settings for “Friends except for Acquaintances” making it an great place to plop all those people whose updates you used to hide.

Frictionless Sharing: George Orwell would be proud of the double plus good phrasing here to describe letting Facebook grab all your activities without getting your permission. (Actually, you give them permission the first time, after that it’s blue ocean.) This is already freaking out the privacy advocates (you can just see the conspiracy theory posts already) and it’s going to take the Boomers a good long time to feel comfortable about automatically sharing things. Their kids may be more open to it, but not a whole lot of high schoolers are going to be sharing what they read on the Washington Post site. As the function expands into things like sports and celebrity news, we’ll see a lot of younger people taking advantage of it, whereas their parents (if they’re lured in at all) will likely start sharing around sites they feel some connection to (sports, politics, hobbies) and want to bring some real world friends into the experience.

BOTTOM LINE: The people who make lunch plans in the comment section of each other’s vacation photos aren’t going to like the new features, but that’s okay: they’re not going to use them. At least not for a while. Facebook hasn’t radically changed the experience for anyone who doesn’t buy into the new philosophy and their Boomer audience isn’t going anywhere.

Younger users however, are going to be pretty stoked over things like music sharing and Timelines and instant Hulu. There are enough bright shiny toys here to keep them in Uncle Zuck’s house for a while, and stop them from going to hang with Uncle Sergey and the Plus Gang down the street.
at 6:17 PM

Labels: Buzzword Of The Month Club, Convergence, Social Media Is Only Social If You're Alone, The Real Digital Revolution