Sometimes You Don't Need A Headline 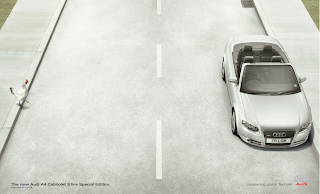 I really like this Audi ad, done by fellow blogger Simon Veksner, a/k/a Scamp, who works at BBH in London.

And while I'm sure the chicken-crossing-the-road thing has been done before, I like the juxtaposition of the downscale-joke-chicken with the upscale-big bucks-convertible.

The "get" is nice too- it makes you feel smarter somehow, for solving it. Kudos to Audi for not making them put in a headline or a copy line to explain the joke to the truly dumb. Having to figure out the not-very-difficult-to-figure-out joke on your own somehow adds to the upscale feeling of the ad and the car.
at 6:18 PM

I hadn't thought of it like that - good point about the lack of a headline.

That's be Simon Veksner, not Vinick.

Ha ha. Writing 'that's be' in a corrective comment. The irony...

WHY DID THE CUSTOMER CROSS THE ROAD?
To buy my chicken.

is that really you ed?

That'd be cool if McCabe was here.

tom, if you read this, do your part. please. it would be fun to get the greats commenting on the ad blogs.

at least until everyone realizes that you were all, in fact, out of your minds to begin with.

I was not a contemporary of McCabe at Ally. He left in 1967; I got there in '72.
I guess we get along very well when we see each other because I never worked with him or for him. I interviewed with him, but he hired someone else which probably worked out for both of us.
I just saw him last month at the Hall of Fame dinner for Phil Dusenberry, Paul Rand, and someone else whose name I can't remember.
He has a Blackberry since he entered my e-mail address; if he connects, I will let him know.

that would be great. ed would make a great blogger.

as a former employee, i'd think twice before commenting on ed's blog ;-)