The End of "Creative" Hegemony 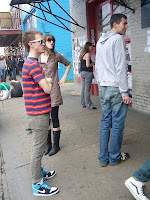 “Why is an account guy coming up with ad ideas?”

It’s a line I heard way too often during my years in ad agency creative departments because, you know, the two years spent in portfolio school clearly gave us a knowledge and understanding of funny and clever that exceeded that of the common man.

That was-- and still is-- the law in most traditional ad shops: the “creatives” come up with the “creative”-- the TV spots and print ads that are the agency’s raison d’etre-- and everyone else is just there for silent support. It’s a mindset that continues despite numerous claims of “integration” and “we're an idea shop.”

And it’s killing off any chance these agencies may have of being taken seriously again.

If there’s anything the past few years have taught us, it’s that the slavish devotion with which many creatives pride themselves on being able to determine the exact right shade of blue, the exact distance from the edge of the page the logo must exist in 128 languages, or the exact moment a pun crosses the line from cool to corny is not really all that much in demand anymore.

That’s because the smoke and mirrors that once worked on consumers has lost its magic now that we can get our product information from unbiased (or uninterested) sources. (e.g. The Real Digital Revolution.)

And so the only way to change consumer perception is to change the actual product or service.

I mean seriously, when was the last time an ad made you think that “hey, this thing is not as bad as I thought” unless, of course, the product had actually undergone a significant upgrade. Ditto new product launches: how many times have you bought something that had awful advertising mostly because you thought “ginger-pomegranate” sounded like it would taste really good or because when you went online to research the category, everyone seemed to be raving about it.

Now these changes do not signal the death knell of creativity, but rather the narrow definition the ad industry bestowed upon it. Creativity is a much broader term these days, as it encompasses everything from a media strategy to a product development cycle to the content strategy on a Facebook page. And the agency of the future is going to have to jump on all these loose threads and tie them together into some sort of cohesive something.

Now the good news is that I see this new model of creativity in place at many of the smaller digital shops I work with; even a few of the somewhat larger ones. Where the creative department is just one of many, and the media guy offering up an idea doesn't feel the need to preface his comment with “I’m no copywriter, but...”