Sometime this morning, both AgencySpy and AdFreak both ran copies of an ad (click above to see a larger version) for the World Wildlife Fund that capitalized on the tragedy of 9/11. The ad was from a Brazilian agency and the AgencySpy post even included full credit.

The ad was highly offensive although many of us had our radars set off since (a) Brazilian agencies are somewhat notorious for producing fake ads for award show purposes and (b) like many fake Brazilian ads, this one was in English. (Brazilians speak Portuguese.)

A number of people, myself included, tweeted about this ad or commented on it and almost all the commentary was negative.

Within a few hours, the US branch of the World Wildlife Fund used its Twitter account to spread the word that the ad was likely a fake, that they had nothing to do with it and also found it highly offensive.

They subsequently sent out this press release confirming that is is indeed a fraud ad that never was approved by them from an agency they never hired.

Even better: the ad won a One Show Merit Award in 2009!!! (Update, 9/2: The One Show has removed the ad from their site, but Gothamist has a link to a screenshot along with the curious comment from The One Club that "The ad was withdrawn by DDB Brazil. It is not a merit award winner in the One Show and will not appear in the One Show Annual.")

The fact that the WWF literally contacted everyone who tweeted about it, and that they did so within hours, shows social media savvy not usually associated with non-profits. It was, as the kids say, FTW!

UPDATE (9/2/09): The story is being picked up by the mainstream media: Fox News, NBC and the New York Times all have stories on it today. What's unfortunate is that despite the headlines and the copy emphasizing the ad is fake and WWF condemns it, some commenters are missing that entirely and blaming the WWF. 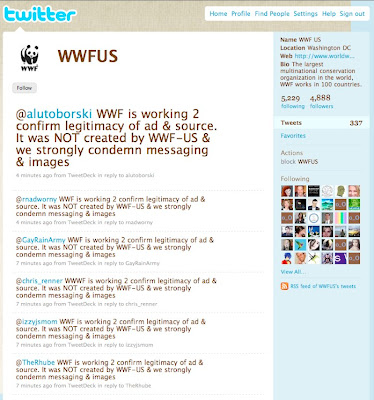 Even more south of the border sleaziness... see the update post!
at 3:41 PM