The Three Stages of Social TV 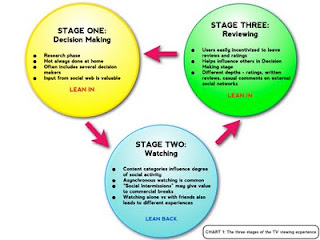 
In his 1980s masterpiece The Art of Fiction, the late John Gardner said that a great novel should be like "a vivid and continuous dream" one that even the author's own voice should not be capable of interrupting.

Gardner certainly hadn't contemplated the conundrum posed by Social Television where everyone is looking for the magic formula to break us out of the vivid and continuous dreams on the screen and pay attention to each other in a way that's easily controlled and easily monetized.

But a closer look at a term like "social television" shows us that there are three distinct stages of the TV watching experience: Decision Making, Watching and Reviewing, and they all feed on each other in a circular rather than linear patter.


The first question is always going to be "what should we (I) watch?" And the first place we generally turn for that is the Program Guide on the cable box.

Which makes it the perfect opportunity for a Social TV play.

The viewer is actively taking part in a “lean-in” activity. They have not engaged with the programming yet. They are looking for advice, and a large part of what’s made the current crop of social media favorites so successful, is that they help us in the decision-making process. Facebook and Twitter help us decide what to read, what YouTube videos to watch, what news stories to follow. Yelp helps us decide what restaurants to go to, FourSquare helps us determine which bars are hopping.

The ability to gather information from the social web will be a huge boon to the Decision Maker. What shows are my friends watching now? What have they watched, recorded and/or downloaded recently? What are most people in my town watching? What about most people my age?

Let’s look at how that might play out in real life, in America, circa 2011.

Your cable TV provider (e.g. FIOS, Time-Warner, Cablevision) would provide a Program Guide app that worked on your tablet or smartphone. It  would immediately let you customize the default view to something more manageable than all 1598 channels on offer. It would allow you to see, in real time, what shows were getting the most social activity.  (You could customize the inputs there too, so you’d know that “4 of your friends recorded American Idol this week.") You’d then be able to see what people were actually saying, tapping into Twitter and Facebook feeds that showed real time conversation. You’d even be able to respond to and share those comments without leaving the app.

You’d be able to save a show to your DVR with just one click. Rent VOD movies with one click. Even get in touch with customer service, if that’s what you needed.

Each show would have its own robust page, with preview video, photos and bios of cast members, and stats (e.g. 4th most recorded show in Chicagoland area.) You’d also be able to see reviews and ratings from your friends or from the greater community.

There will also be ample opportunity for targeted advertising.

And since all this activity happens before we actually start watching, before the “lean back experience” starts, we’re not going to mind it. It will feel like research, not like an interruption. Particularly if we look at where the experience happens. Sometimes it’s in the den, with everyone sitting around waiting for a decision. But just as often it happens long before the actual viewing: at the office, over dinner, on the ride home.

All of which are places we’re quite happy to be social.

Yap.tv has an interesting version of a social program guide app available now. But it’s not tied to any particular cable provider. Imagine how much more useful it would be if it was though, and you could download and rent and buy and get customer service questions answered and give input to the cable company, all from the same app.

One other thing that’s notable about Yap is that it showcases the huge volume of chatter that is currently going on around TV shows. It’s a pretty constant flow and we’re not aware of it because it comes from a different demographic: teens and tweens, for the most part, and a far more diverse group than the tech/media crowd we often associate with Twitter.

And so here’s another reason for embedding Social TV in the Decision Making process: the behavior is already there. People are already commenting about television shows in large numbers. A Social TV app would simply harness that behavior and make the data around it useful to other viewers.

So once we’ve actually made the decision, it’s time to watch. This is where social gets sticky.

Because watching is a “lean back” experience. And how much we want to lean back depends on our relationship to the content.

Sports programming, particularly baseball, football and basketball have lots of timeouts and other breaks in the action, which gives us ample opportunity to lean in and start talking with our peers, both online and off.

But take a new episode of a crime drama. For many people, this will demand their full concentration. They may want to discuss it at some point, but not while the plot is unfolding.

Which brings up another option: the use of commercials as “Social Intermissions.”

Since we watch TV at home, we have gotten in the habit of taking regular breaks. But with DVRs and VOD, those breaks no longer exist and so we turn to the “pause” button. Scheduled commercial breaks, euphemistically called “Social Intermissions” may be welcome by consumers and rather than blaring out jingles, brands could use this time to engage viewers around the content they’re watching, or at the very least around some sort of social action they can take on the iPad (a poll, a game)

This may also ameliorate the effects of something I identified years ago: Social Media Is Only “Social” If You’re Alone. If you’re sitting with friends watching a TV show, you’re going to be sharing your comments with them. Not with random strangers on the interwebs. A planned break that encourages you to go online and engage in something social may make that sort of activity more palatable.

Dramas and action shows are Low Social programming: we’re engrossed in the show and don’t want to talk to anyone while it’s on. The action is continuous and there are no logical places to take a break and start talking.

Comedies are Mid Social. It’s fun to share the jokes and most comedies don’t demand your full attention. But there aren’t clearly delineated breaks either, just ebbs and flows in the plot line.

Reality Dramas, shows like Jersey Shore are also Mid Social. The combination of slow-paced scenes and “I can’t believe this!” moments makes conversation easier, but we’re always watching for the unexpected left hook or vomit shot , so there’s a pull on our attention.

Reality Game Shows (Amazing Race, American Idol, etc.) and Sports are both High Social. There are plenty of clearly defined breaks and the winner/loser dynamic both make for easy conversation - both at home and online.

This chart helps break it out:

The biggest challenge of the Watching stage is not that people don’t like to chat during CSI Miami. It’s that asynchronous viewing patterns mean they rarely watch it at the same time.

The trend towards on-demand viewing, whether through DVR, VOD or services like Netflix, is growing exponentially. We cannot expect that Program Guide app users will all be watching shows at the same time. Which is why the one-click recording and inclusion of shows currently on their DVRs will both be important.

One click recording allows me to catch up with what my friends are watching or a show that seems to be getting a lot of social activity. Including my recordings in my current listings allows me to see the full range of possibilities available to me as well as any activity around them, which may well have increased since I first recorded the show.

In terms of asynchronous sharing, technology exists that allows me to insert comments that are attached to specific time codes on the recording. That way a friend can watch along an see comments seemingly in real time. This can even be a group experience, where each new user adds comments or “likes” someone else’s comment.

Once we’ve watched a show, we’re far more likely to review it. A well-designed Social TV app can prompt that behavior too - either by asking you to rate a show as it’s ending or creating a points and levels system that rewards users for leaving ratings and reviews.

In addition to “official” on-site reviews, the app can aggregate opinions and comments left on the social web, adding yet another metric for users to refer to in the Decision Making stage.

There’s a use for the time code technology discussed earlier here too: users can be given the option to “Re-watch and Comment” on a show, so that they can go back and insert their comments (at appropriate times) now that they’ve seen how the show (or game) ends.

Which loops us back around to the Decision Making process. More than encouraging reviews, a well designed Social TV app will provide other users with data around those reviews. Sliced and diced by age, location, gender and other identifiers. A key data point will be activity from our own social graphs.


So to wrap this all up, if I was a cable or IPTV operator, I’d be looking to develop apps that took advantage of Stage 1 and Stage 3, the lean-in experiences, where we already have the means and behavior necessary to create useful social applications. And while I was doing that, I’d keep my eyes on the lean back experience and see what develops as TV viewing becomes more social and more asynchronous.

(NB: We'll be taking a deeper look at some of these trends and stages in future posts. Think of this as a high level overview.)
at 3:11 PM