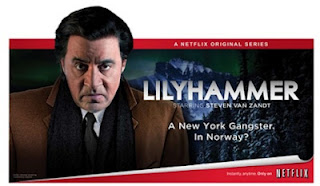 One of the most significant developments in the TV landscape went virtually unreported earlier this month. There had been much speculation around how Netflix would handle the release of their new original series, given the non-linear nature of the service.

They surprised most observers, however, when they announced that in launching their new series Lilyhammer, a crime drama starring Steve Van Zandt, they would be releasing all 8 episodes at once.

Now research has shown this to be an excellent tactic for short-form content: viewers get hooked on a series by watching 3 or 4 episodes at once and don’t have to remember to return to the site on a weekly basis.

So-called “binge TV” - where viewers use services like Netflix or iTunes to catch up on entire seasons has become popular enough to warrant its own nickname. For many people it’s their preferred way of watching.

Which is why Netflix play is at once brilliant and revolutionary. Because suddenly the notion of linear TV is completely off the table and a complete on-demand line-up is in place.

The effects of this will be myriad: take the way TV shows are currently marketed, for instance. Rather than rely on on-air promos and growing buzz over the course of the season, TV shows will be marketed more like movies, with a huge build-up around the initial release date, followed by a combination of paid media and social buzz as follow-through. There will be a long-tail for shows who enjoy popularity as reruns or as “cult classics” but for most shows, the initial release will be do-or-die time.

The “Lilyhammer Effect” will also have a major influence on how TV shows are developed. Currently, writers have the option of shifting the emphasis to a breakout minor character or dropping a plot line that seems unpopular with audiences. But with a whole season to deliver at once, writers will have to rely on instinct and luck.

Production schedules will feel the impact too. While shows are currently written, filmed and edited week-by-week, with writers and actors racing to keep up with constant deadlines, the new series will be able to be shot all at once. This may create some economies of scale, but will also demand a greater commitment from networks: they no longer have the option of shutting down an unpopular series after a few episodes. So look for shorter seasons, with producers putting out 6-show seasons to both cut risk and lessen the time between releases.

But the biggest effect, perhaps, will be felt by consumers, who will be freed from a linear schedule. That means taking a more active role in viewing decisions as nothing will ever just be “on”. Both networks and network operators (pay-tv providers) may offer “recommended viewing” schedules, likely customized to a user’s tastes, and independent recommendation systems will flourish as well. One particular niche will be systems that offer recommendations for group viewing by taking into account each family member’s unique tastes and ability to understand adult-oriented content.

Perhaps the most amazing thing about the Lilyhammer Effect is that it’s not the ramblings of some TV futurist: it’s here and already happening today.