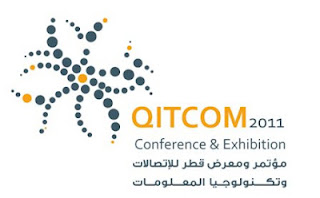 I had the pleasure of representing KIT digital at QITCOM, the annual conference held in Doha, Qatar. My panel was on Social TV and my fellow panelists represented 6 different countries. Social TV is a different animal in the Arab world and the entire conference was most definitely an eye-opener.
But first a little set-up: Doha is well on its way to becoming the next Dubai. The economy is booming and there are buildings going up everywhere you look. In places, it looks a lot like the suburbs of Dallas or Las Vegas circa 2004, where entire towns seemed to spring up out of the desert overnight, symmetrically designed and carefully landscaped.
It’s easy to get lulled into thinking you’ve landed in Princess Jasmine’s Oasis at Disney World, but those people in the traditional dishdashas, kefiyas and veiled burkas are not cast members: they’re the ones in charge. And yet the Al Jazeera network is based here too, in a heavily secured state of the art compound. Which is why the conversation about Social TV takes on a different character than it does in the US.
In the Arab world, social TV means spreading news stories via YouTube, Twitter and other social networks, and vetting those tweets and clips for the TV news, where it’s also given context.
With so much going on in the region and a dearth of credible, uncensored news sources, it’s only natural that organizations like Al-Jazeera use social news as a primary tool.
They’re appropriated many of the same techniques that brands use in social media: identifying influencers and trusted sources, relying on those “brand evangelists” (so to speak) to bring them the news so that they can spread it.
There’s also a timeliness factor to their stories: where an entertainment channel can rely on catch-up viewing, reruns and creating a story arc that’s easily caught up to in a couple of “binge” settings, a news story has a very limited shelf life.
Once we moved from news to content, I was struck by the similarities between the Arab and Latin American worlds. These are the two regions where a common language unites a large swath of diverse nations. I learned that the Arabic spoken in the Gulf, Egypt and the Levant is not easily understood in Morocco and Algeria, much in the way Mexican Spanish doesn’t always translate in the Caribbean and Argentina. Arab television has long been dominated by kitschy soap operas from Egypt, which bear a strong resemblance to Latin American telenovelas.
In both regions, social TV and the advent of the convergence have made it easier for independent content creators to begin to break the norm. Using YouTube channels and fledgling OTT networks, they are offering viewers a greater choice of content and allowing them to spread that content via their social networks. One of my co-panelists, Johnny Dabeet runs a production company out of Amman, Jordan that has launched a very successful comedy series called “Bath Bayakha” on YouTube and is looking for a way to distribute it via OTT networks. Word about the series has spread virally and Dabeet’s hope is that as series like his become more successful, established broadcasters will begin to realize that the Arab world is ready for more sophisticated content.

But the social behavior that helped launch these series is not going away, and, if anything, will become more of a force in the Arab and Latin American worlds as locally produced content continues to flourish and expand.
at 8:34 PM