The Dawning Of The Rise of the Next Golden Age 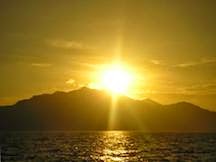 For most of its relatively short life, television has been resigned to being background noise. While there were occasional shows that captured our attention, for the most part the television served as the soundtrack to our lives, filling the void so things didn’t seem so lonely.

That’s changing though, and television is now being consumed a lot more like books or movies: as a conscious choice, at a set time, with the concurrent expectation of quality inherent in that sort of decision.

It’s a combination of several factors: the internet has become our new background noise, a combination of websites and YouTube videos and tweets and Facebook posts splayed across multiple screens, providing us with the electronic hearth the television once did.

At that same time (and partly because of the new delivery methods enabled by the web) the quality of television has improved and the number of outlets for quality programs has grown along with it. Networks that began life as background noise (AMC, FX) or delivery systems (Netflix, Amazon) now have top quality programming. And the list is growing.

That’s changing the way we watch TV, but more importantly, it’s changing the way we think about TV. Decisions are now in the hands of the viewers and what they want to watch, not broadcasters and what they want to serve up. That’s a huge change and it’s soon going to be reflected in television’s business model, whether the industry is ready for it or not.

That change is going to hit the current ad supported model smack dab in the gonads.

Because no one wants to watch ads. Least of all a generation raised on Netflix. Where, in case you needed reminding, there are no ads. So look for the television equivalent of branded content or native advertising to replace interruptive advertising. Something that’s the diametric opposite of the sixty second pharma commercials with their tai chi’ng seniors and the 5 minute ad blocks that mark the waning days of commercial TV.

Change is also going to hit the idea of where the borders of a series lie. Because it’s no longer just about a seaon's worth of 22 or 44 minute scripts, cranked out week after week. It’s about creating an entire world around a show via second screen and social and gaming and other media and understanding that the ultimate viewer of those experiences may not actually see them during the lifetime of their creators. That’s creating something for perpetuity and the ensuing pressure is going to help ensure that the quality programming we’ve seen blossom is not just a passing fad.

Because as watching TV becomes more like reading a book, viewers are going to be able to choose what series they plow through from an increasingly broad and varied selection of current and prior favorites. Such is the blessing of the second golden age of TV.

It means that showrunners (or someone on their staff) must have an understanding that the strength of that entire experience is what’s going to take someone from being the person who watches just one episode in passing to someone who watches the entire series in full. And most likely pays for the privilege.

Shows will need to engage current and future viewers, to bring them into the show’s world wherever they may encounter them and help them to stay engaged. They must account for varying levels of fandom from the obsessed “shippers” on Tumblr and Reddit to the multitasking chatters on Twitter to the between-friends masses on Facebook and everyone in between. This is going to require a new set of skills, people who understand that driving live tune- in is only the first step and that every show has to be viewed as a long term project.

This world will be on us sooner than we expect it because if we’ve learned one thing since the dawn of the industrial revolution, it’s that change happens gradually and then all at once. The good news is that most players will be the better for it. Viewers will have better and more varied programming and above all, choice. Actors will have better roles, more opportunities and more ways to earn royalty fees. Writers, directors and producers will have similar opportunities re: royalty fees and will also be freed up to explore the boundaries of what’s possible in transmedia experiences.

The only losers here might be print media and the movies. Because as serialized television takes a more prominent role in our culture, those media will either have to step up their game or risk losing a piece of a finite audience. Though given their lackluster performance over the past few years, I can’t but think a little competition would be a good thing.