Native Advertising On TV: What Does It Look Like And How Will It Work? 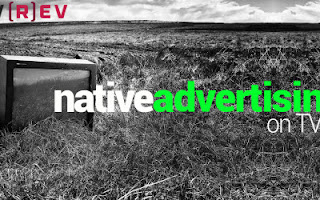 Originally published at TVREV.com on December 9, 2015

Native advertising has been a big hit on the web and sites like BuzzFeed have practically turned it into an art form. The format is not without it’s detractors though, who claim that it blurs the line between editorial and advertising.  But in a world of ad block software, publishers are all in favor of a format that actually captures consumers’ attention.

So how does this new ad format translate from the web to TV? Can native advertising be the boon for television that it’s been for the web?

Let’s start with a basic definition of “native advertising.” Online, it is a form of branded content, a story written in the style of the website, but about (tangentially or directly) the advertiser’s product or service. So for example, the New York Times famously ran a story on women’s prisons that was commissioned by the Netflix women’s prison drama “Orange Is The New Black.”  The idea is that the native ad should be every bit as entertaining as the rest of the content on the site to the point where users shouldn’t  immediately detect a distinction. (Hence the pushback on editorial vs advertising.)

What makes native advertising on television so hard to define is that unlike Buzzfeed articles, TV shows are long-form. So creating something that’s indistinguishable from the rest of the line-up is not as easily accomplished.

Further complicating matters is the fact that many networks don’t have a defining “voice” anymore, which makes creating something in their “voice” somewhat Sisyphean. And while everyone from BuzzFeed to the Times has hired staffers to create native advertising for them, the closest the TV industry has come is a storyline on HBO’s “Girls” mocking the format.

It might be easiest to start by defining what native advertising is not.

It’s not product placement, even when that placement is somewhat blatant and involves dialog. (ABC’s recent Star Wars promos are a good example of this: characters in ABC’s sitcoms discussed the movie and going to the movie, but that promotion was product placement, not native advertising.)

There are commercials using the stars of scripted programming, in-character, but those are not native ads either, just co-branded promos. They feel like ads starring the show’s actors, not new, unreleased scenes from the show.

Similarly, there are promos involving the stars of non-scripted programs like award shows. But those aren’t native advertising either, just (wait for it) promos involving the stars of non-scripted programming. They’re a throwback of sorts to TV’s first golden age, where announcers read copy about the show’s sponsor before the show began.

Finally, there’s branded content, which is different because it’s not specifically about the product, but rather about a core value of the product. (Think Red Bull and their action sports videos.) Branded content can pretty much live anywhere and if it fits in with a specific network, great, but it’s designed to live in its own, which is what differentiates it from native.

So the question remains: how do you do native advertising on TV.

Native advertising can also work on travel and entertainment shows (for brands in those categories—think a history of cable cars segment for San Francisco’s St. Francis Hotel) and on nature and science shows as well.  In all these categories, the brand story can easily be woven in to the fabric of the show without rending it.

There will be some pushback at first, as viewers come to grips with the new format and networks figure out where the line between editorial and advertising sits.

But eventually the kinks will get ironed out and viewers will come to accept native advertising as a more entertaining alternative to interruptive.