Star Wars, You Are Not: The Lessons Of The Prom King Brand 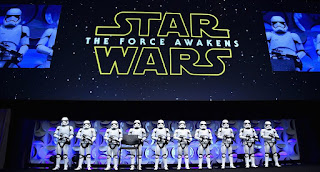 Originally published at TVREV.com on December 2, 2015

Star Wars has been all over the media these past weeks. Not just news stories about the movie’s upcoming debut, but dozens (if not hundreds) of promotions on everything from Ellen’s Heads Up game to successful product placement on something like a half dozen popular ABC shows.

They’ve done such a good job of it, you might be tempted to think of it as the future of movie promotions.

But you would be wrong.

Star Wars is a unique property. With the possible exception of ET, no other movie has such a palpable hold on American pop culture. Everyone, from eight year-olds to eighty year-olds knows what “May the force be with you,” means. Ditto “Luke, I am your father.” Darth Vader may be better known than Kim Kardashian. And show anyone a hairstyle with two headphone-like buns and the immediate reaction is “Princess Leia.”

Not bad for a movie that came out 38 years ago.

Star Wars is what’s known as a “Prom King Brand.” That is a brand with such a high cool factor, people interact with it just for the sake of being associated with it. Nike is a Prom King Brand. So (for now) are Apple and Starbucks. Popular entertainment properties (“Game of Thrones”, “Big Bang Theory”) are Prom King Brands, as are popular music acts and most sports teams. (An easy test for a Prom King Brand is “would many people unironically buy a cap or t-shirt with the brand’s logo on it?” If the answer is “yes”, then it’s a Prom King Brand.)

Other brands need to work harder in social media and beyond. They need to give something in order to get people to interact with them. That something can be entertainment, it can be utility, it can be information or even a financial reward. But while Apple could put up a blank Facebook page and wind up with 2 million fans, that’s a fluke, not an easily replicable formula.

Ditto Star Wars. ABC’s showrunners are happy to integrate some Star Wars promotion into their shows because it seems natural. It’s something their characters would be talking about regardless, given all the hype around the upcoming release. To the point where I’m guessing many (if not most) viewers weren’t even aware they were watching a paid promotion.

Compare that with Creed, the latest movie in the decades-long Rocky franchise. Creed is not as easy to integrate. While Rocky was an iconic movie in its day, that day has passed and I’m not sure how many people under 30 would even know what “Yo! Adrienne!” meant.

That means you can’t easily weave the movie into existing TV shows (ABC or otherwise) without it feeling horribly forced. Ellen’s not going to come out with a “Creed Edition” of Heads up. And brands aren’t rushing to create sponsored co-promotions with Creed.

That’s a movie from a well-known franchise too, one that’s probably going to make it’s investors money back. Smaller films, lesser known films, films that aren’t established franchises are all going to have to be promoted another way. A way that gives audiences a reason for wanting to interact with the promotions. Unlike Star Wars, it’s not enough just to show up with your shiny robots and wisdom spouting elders in tow. People are going to expect something from you in return for their attention.

Brands too. When Star Wars does a co-promotion with a brand, Star Wars is the star. When the movie is the latest Jennifer Aniston rom-com, that line gets blurry and oftentimes it’s Dunkin Donuts in the lead role, with RomCom as a secondary character. And that’s okay—not every movie is a star its first time out.

The Star Wars team has done a stellar job of promoting the movie’s return. That’s a high compliment, because with great expectations also come great falls. But they were up to the task and they aced it. So a round of polite golf claps. Or maybe even light sabres aloft.

Just don’t think there’s anything your brand or your movie can take away from it, though. Unless, of course, you happen to be sitting on the next Star Wars. Otherwise, you’re going to have to work a whole lot harder for attention.

That’s not necessarily a lesser proposition.

Labels: Buzzword Of The Month Club, The Business, Your Brand Is Not My Friend