Casual Gaming For The Common Man

Social Net game developer Playfish just received a $17 million VC hit. But more than that, they may have figured out a way to make money off of Facebook.

London-based Playfish makes easy-to-use trivia type games like GeoChallenge, Word Challenge and Who Has The Biggest Brain. On a site like Facebook you can play against your friends and/or check to see who has the highest score.

As Playfish CEO Kristian Segerstrale noted in an interview with Techncrunch, unlike traditional online games “people play our games with the same people that they would play cards, play board games or go bowling with in the real world.” In my experience, their games are fun, easy to learn and a great way to kill a couple of minutes between tasks.

What I find particularly interesting about Playfish though is that they're trying to monetize their Facebook fan base. To wit: This morning, I logged on and saw this message in my "Notifications" box: 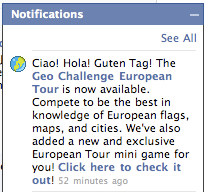 Since I like playing Geo Challenge, and know a lot about European geography, I was intrigued enough to click on it. After several levels, I came to this screen: 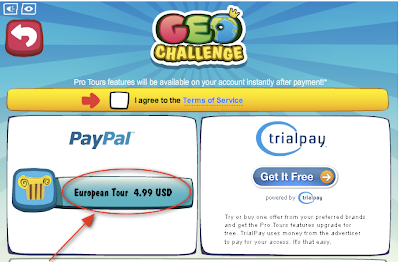 Now I didn't bite this time... I don't like GeoChallenge that much. But I might in the future if I'm feeling particularly flush. Or I might have bitten if the price was $1.99. And I'm sure plenty of other people have bitten. If just 5% of their 10 million active monthly users sign up, that's a $500,000 profit on what's basically an add-on to an existing game.

It's the standard "create something people really enjoy using and then, once you've got them hooked, monetize it" ploy, but it's particularly well done. Why? Because Playfish is just charging you for the extras. Not the primary service. So they're not taking anything away, not penalizing you for not paying. They're just giving you the option to do more.

Twitter, to give but one example, might look at this with particular interest. Because what if Twitter started charging $5/month for "pro" features, the stuff we've all been asking for, like the ability to temporarily unfollow someone who's livetweeting from a conference or respond to a direct message via email. Lots of people might sign up for it and those who didn't wouldn't feel ripped off, since the service they were using hadn't changed.