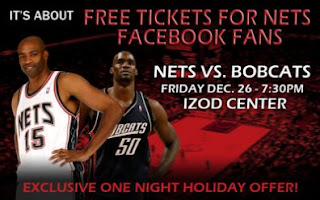 As many of you who've been reading this blog for a while know, my family and I are huge basketball fans and the local team, the New Jersey Nets, are a particular obsession.

The Nets discovered social media this year, setting up well-done groups on both MySpace and Facebook (well done too, because they recognized the differences in functionality, layout and fan base and because each site provided links to the all their other social media sites: Facebook, MySpace, Flickr and YouTube.)

So I was more than a little thrilled last Tuesday when I received an update from the Facebook fan group telling me that they'd be giving out free tickets to group members (there are close to 1,000 of us.) And even more thrilled this past Friday when the actual offer came out and it was strings-free. No registration, no caveats, no value-detracting limitations.

All you had to go was go to Ticketmaster (the online service that normally sells Nets tickets) enter the secret discount code, and voila!

Ten minutes later I had four tickets in my possession. Not courtside seats, obviously, but center court and best of all: free. Had I paid for them, the tickets would have cost me $100 minimum. Another plus: the game is for Friday, December 26th, which falls in the middle of winter vacation so no worries about school the day before or after.

That's quite a generous promotion and one that's definitely increased this fan's loyalty. It's also a great illustration of how a "Prom King Brand" like a sports team can use social media effectively.

Now if only Facebook would make it easier to distinguish "official" groups from fan-created ones. Or to find them in the first place. But that's the subject of another post.
at 8:04 PM