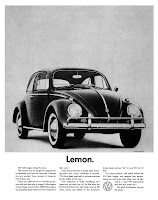 There’s been much debate in the blogosphere this past week about the dearth of creativity in advertising these days, digital advertising in particular. So my ears perked up during a Social Media Week session on Friday, when Gary Vaynerchuk raised an interesting point: social media, or more specifically, digitally-enabled Word of Mouth had become such, that a really great product with a really lousy ad campaign will only be marginally affected. Eventually, Vaynerchuk asserted, positive word-of-mouth about the great product will take over and become the great marketing campaign the product deserves.

Let’s start with what’s right about his assertion: there are many products that manage to overcome bad or forgettable ad campaigns. Subaru is a perfect example. While Detroit and most foreign automakers have been taking severe hits, Subaru is actually expanding its market. They’ve managed to slide right into the niche previously occupied by Volvo: the inexpensive utilitarian car for upper middle class professionals. All without anything even vaguely resembling a successful ad campaign.

They’ve done it by having really good products. And as the owner of two Foresters (our fourth and fifth, I believe) I can attest to that. Foresters may not be the world’s most beautiful cars, but they look distinctive and, more importantly, they don’t look cheap. They’re good in the snow, have ample cargo room and excellent repair records. Consumer Reports loves them to death.

Now we became Forester fans through old-fashioned Word of Mouth: my in-laws had one, loved it and sold us on its virtues. But social media means that you can now track word of mouth via search engines a quick visit with “The Google” shows lots of Forester love out there. So odds are good people are finding it these days without any help from their in-laws.

But Subaru isn’t alone. I truly feel that a critical mass of American consumers have become advertising-resistant: that is, they ignore the stylings of the ad and only pull out the substance: is there news in this ad that may be of interest to me? If so, I will act on it regardless of how I feel about the creative. In the real world that means that if I love strawberries and like having Cheerios for breakfast, an ad informing me of the introduction of Strawberry Cheerios will likely result in me trying the product. No matter how cheesy and awful and insulting and goofy I may find the actual commercial to be. All that I will take in is “Strawberry Cheerios. Yum.” (The reverse is also true: if I find Starburst revolting, it doesn’t matter how many times I’ve watched “Berries and Cream” on YouTube: I’m just not buying any.)

I’ve often said that the alpha and the omega of social media is to make a product people really like and/or want to talk about. As obvious as that sounds, it’s a concept lost on many marketers. But it may be all many products need today: create enough digital buzz, make sure your SEO is working right and you don’t need a whole lot of advertising.

But that doesn’t mean creativity is dead.

Far from it. To begin with, we need to expand our definition of creativity: a great package design, a well-done retail store are both “creative” endeavors that help “create” an aura around a brand and the way we feel about it. Serve Starbucks coffee in a harshly lit, badly furnished cafeteria and suddenly it’s not tasting anywhere near as good as it does in their cozy little stores.

But perhaps the most important thing good creative can do is make us feel even better about products we already like. You need not look any further than Apple for proof of how this works. Every time Justin Long scores another one on hapless John Hodgeman, Apple fan boys everywhere feel that much smarter about their choices. Not that a bad commercial would sway them from the Jobs-love, mind you. But a good one just pumps the joy level an extra notch.

Good creative also encourages trial. It can’t make me like a bad product. But it can get me to look into a new one. And if what I find on Google and Twitter and Amazon and Facebook is universally positive, then that good creative will also increase sales.

So here’s my takeaway: Vaynerchuk is right. Good products don’t need advertising anymore. Word-of-Mouth amplified via social media is enough to make them successful even in the face of bad agency-created advertising. But at the same time, good creative is not a neutral. It’s a positive and when combined with a good product with good WOM, gets consumers to “yes” a lot faster and a lot more often.