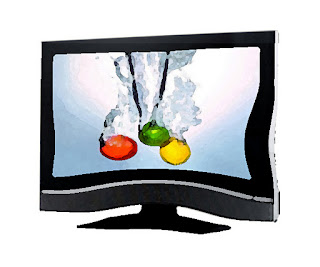 As the convergence of the TV and Interwebs moves ahead, there are still a number of behaviors the industry must figure out how to change, solve for or live with. To wit:

TV Is Not A Solitary Activity: whether it’s a group of college roommates or the more traditional family unit, few people have their own personal TVs. That makes recommendation engines a bigger challenge than the kool-aid drinkers let on. Figuring out an easy way for the system to understand who is in the room is going to be one of the biggest UX challenges of our time.
Because it’s not just knowing that Dad is in the room and showing him shows he might want to watch. It’s knowing that dad and 8-year old Betty are in the room and figuring out which shows the two of them might want to watch. Or knowing that Betty is the one actually watching TV and Dad is just there keeping her company while he tries to make his way through his email.

Or Is It?: One of the things that a TV Everywhere system may enable is more private viewing of programs. (Think of what the Walkman and the iPod did for music, which was once an unavoidably group activity.) The ability to pick up a show or movie on a smartphone from just about anywhere with a signal and watch with headphones on would seem to indicate that we’re on the road to more individualized viewing experiences and perhaps the lessening of the TV’s role as the electronic fireplace. If everyone is watching their own programming, the need for online social activity becomes at once more and less inmportant.

Surfing: Twenty years ago, Bruce Springsteen sang about “57 channels and nothing on” and now that we’re up 2,000 channel, it still feels like there’s nothing on. That’s why channel surfing is such an ingrained American habit. We turn on the TV and flip through to see what we can find. A lot of the time, we’re not looking for anything specific as much as a way to kill 20 minutes before the program we want to watch comes on.

But in order for social TV to really work, Americans have got to stop surfing or randomly flipping channels and start exploring shows that are recommended for them. Or at least looking at those recommendations before they begin flipping.

Movies vs Televison: One of the reasons it’s so hard to break the surfing habit is that we don’t make a whole lot of distinction between various TV shows: they’re seen as fairly disposable and outside of shows on obscure channels, we’re generally aware of them: the TV networks spend a whole lot of money on advertising. So the odds of our friends or a smart recommendation engine introducing us to a show we’ve never considered  before aren’t all that high.
Movies, on the other hand, are exactly the sort of thing we’d want a recommendation engine for. First off, given the rights issues around many movies, we’ll want to know which ones are actually available to us right now, and then we’ll want to know which ones our friends (or the critics) liked to help narrow down our choices.

TV Is For Couch Potatoes: Americans tend to regard TV the way they regard chocolate cake: it’s good in small doses, but you wouldn’t want to eat too much of it, much less publicly profess your love. The conventional wisdom in the US right now is still that TV is essentially bad for us, that it turns us into fat, lazy couch potatoes who while the day away watching mindless game shows and soap operas while filling up on transfat-laden foods. It’s okay to like a particular show or two, but TV as a category is just unhealthy.

We have to get people over that hang-up if they’re going to actively participate in any sort of social TV. The way I see it, movies may be the gateway drug here: according to the conventional wisdom, it’s okay to like movies. We even have a flattering word for people who really like movies: cinemaphiles. So if it’s okay to like movies, then it’s okay to talk about them on your social networks, recommend them, even announce that you are watching them. And once it’s okay to obsess over movies, sharing all your TV watching habits will will lose its stigma too.

Are there other behaviors a more interactive and social TV experience will have to acknowledge, solve for or change? I’d love to hear your thoughts.
at 5:51 PM