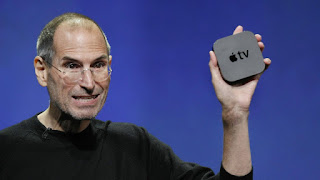 Originally published at TV[R]EV on September 2, 2015

Apple might not be launching their own internet-based pay-TV service any time soon, but if the rumor mill is correct, they may be getting ready to produce some original content. And whether that content consists of iMovies or iSeries, one thing seems pretty clear: Apple will do whatever it takes to keep users tightly ensconced within their closed ecosystem.

A closed system is an anomaly at a time when consumers demand access to content on any device, at any time, in any place. It’s a system that’s served Apple well in the past when the iPod-iTunes loop dominated the music industry back in the mid-00s. But will it work for them ten years later with TV?
The jury is still out on that one, particularly because, when it comes to streaming television, Apple is operating from a position of weakness. Their decision to cling to the TVOD (transactional VOD) business model for iTunes, when everyone else was moving to subscription has left them behind the pack, to a point where it’s seemingly impossible for Apple to pivot, as almost all the existing network content of any value has been snapped up by Netflix, Amazon and Hulu, and all that’s left for Apple are the scraps. Hence original content becomes Apple’s ticket to a subscription model, but original content is expensive and it will take Apple years to produce enough of it to catch up with its competitors.

That said, Apple’s decision to pursue original content may be less about software and more about hardware.

Apple is preparing to launch the latest iteration of its Apple TV and (credible) rumors put the price point at either $149 or $199. That’s a good $100 more than Chromecast, Amazon Fire TV and (especially) Roku and unless there are some significant bells and whistles (which there don’t appear to be—improved Siri integration doesn’t count, nor do the “good enough” games the SDK and app store will churn up)— it’s going to be very hard to convince anyone other than a hardcore fanboy to cough up the extra cash.

Enter original content. If Apple can produce a number of can’t-miss series that can only be seen on iTunes, that may well be the straw that breaks down resistance to  Apple TV’s high price point, bringing new users into the Apple ecosystem, where Apple can monitor their moves and collect their data. It’s a high-risk move, however, because if there’s one thing we know about original content, it’s that it’s very hard to predict what will stick.

And then, of course, there’s Apple’s long rumored pay-TV service.

Here’s where it gets tricky. Apple’s pay-TV service hasn’t launched because the networks don’t want to cut them any kind of a deal. More than YouTube loving, cord-nevering Millennials, the one thing the TV Industrial Complex fears is an Apple with a virtual stranglehold over the industry, the way iTunes once had a stranglehold over the music industry. It sounds almost quaint today, what with Spotify rising and the new Apple Music sinking, but it was once the music industry’s cold hard reality, and the television industry is resolute about not letting it happen again.

So the thought of Apple with it’s own pay-TV bundle plus original content plus a closed ecosystem to play it all on is the stuff of many a Brentwood resident’s nightmares.

In other words, don’t hold your breath for an Apple pay-TV service any time soon.

What does this all mean for the industry?

It means the possibility of a seeing the TV ecosystem bifurcated into Apple and non-Apple, the way the mobile universe currently is, which makes data collection, production and encoding more of a hassle, but opens up the door to those with the ability to work both sides of the room.

Finally, it means that there’s a real possibility that Apple will actually fail at something, that they waited too long (or were forced to wait too long) to actually enter the TV race, and that no amount of shiny Jonny Ives design will dislodge the existing players, who are already well entrenched with products no one seems all that chuffed about.

Which leaves us… right back where we are today, where Facebook’s hoodie-wearers pose far more of an existential threat to the television industry than the mock turtlenecks of Cupertino.