"Over The Top" Reviewed In New York Review Of Books 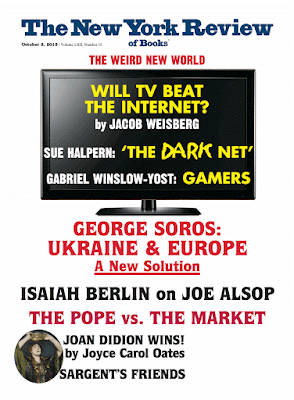 The cover story in this week's New York Review of Books, Will TV Beat The Internet, by Slate editor-in-chief Jacob Weisberg is a review of both my book, Over The Top, How The Internet Is (Slowly But Surely) Changing The Television Industry and Michael Wolff's new book, Television Is The New Television.

While Weisberg takes Wolff to task for overstating the problems of digital media, he has nothing but kind words for Over The Top.

Whatever he believed ten years ago, is Wolff right that it’s now springtime for the old television machers? To answer that question, it’s necessary to step back from his latest embrace of the pre-digital in favor of more evidence-based analysis. An excellent place to start is Alan Wolk’s self-published book Over the Top: How the Internet Is (Slowly but Surely) Changing the Television Industry. Wolk, a well-connected industry analyst, points to a very different future for the television business than the one Wolff depicts. Wolk thinks that the sector is poised for major disruption, even if it’s unclear from which side or how quickly the transformation is likely to come.


Wolk’s book is also more interesting than Wolff’s about the way media economics is changing the shape of filmed content. The all-at-once release model, which Netflix pioneered with the Norwegian-American crime comedy Lilyhammer in 2012, was the experiment that immediately expanded the market for television auteurs. When a twenty- two-episode season was shown over six months, writers could introduce or kill off characters and plot lines in response to audience reactions. Now writers must rely mainly on their own instincts to deliver a finished season designed for binge viewing. This is another factor making scripted TV more novelistic.


You can read the entire review here. 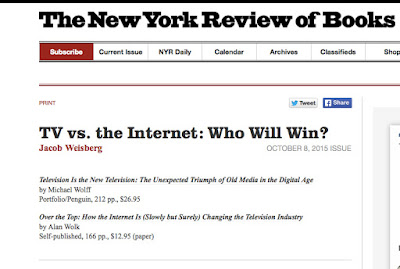