Voting In The Time Of Social Media 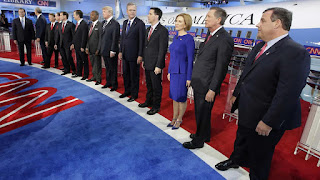 Social media has altered just about every other aspect of our lives, so why not the way we vote. And make no bones about it, this is the first real social presidential election. Sure social media was around in 2012, but it was still in its nascency, people were just figuring Twitter out, Instagram was first coming into its own and Snapchat was just a gleam in Evan Spiegel’s eye.

Obama got wild praise just for having a Twitter account and the inability to figure out social media (and other things “the kids” were into) was an oft-cited reason for Romney’s demise. But now that even aging Southern governors are setting up shop on Snapchat, the definition of “table stakes” has most definitely shifted.

If the first two GOP debates are any indication, social media will play a major role in this year’s election, and not always for the better.

Who was the winner of last nights’ CNN sponsored debate? According to People magazine, it wasn’t any of the 11 candidates up on stage.

No, it was Greg Caruso, the previously unknown 24 year-old son of a billionaire California real estate developer who was dubbed #HotDebateGuy and who somehow managed to get more social media attention than Donald Trump himself. (#HotDebateGuy was sitting in the front row directly behind moderator Jake Tapper and was thus on camera every time Tapper spoke.)

Even  The Skimm mentioned #HotDebateGuy this morning.

So how do candidates compete with a hunky 24 year-old heir? Very very carefully.

You see in today’s Gawkerized social media world, it’s the gaffes that count. Candidates can (and should) maintain accounts across the various platforms in order to ensure that their bases are covered and that their supporters have the right messaging and imagery to share. But that’s about all those accounts are doing, supporting the supporters. Best case scenario, they might actually help a supporter convince an undecided voter, but it’s not like an Instagram video of Jeb! giving a stump speech is going to go viral.

Unless he does something facepalm-worthy. Awkwardly grabs for a bottle of water. Mispronounces his wife’s name. Sneezes on an unsuspecting voter.

That’s social media gold and here’s why it sort of sucks.

Because actual policy statements aren’t sexy. They require thinking and they’re not “fun” like a spilled cup of coffee on a woman wearing a white dress. Blame it on America’s Funniest Home Videos or skateboarding cats, but we’ve been trained not to get too deep on our social media. or risk being branded “boring.” So if Jeb! were to propose a well thought out alternative to Obamacare, if Hillary were to suddenly reverse her position on Iran, neither of those would see much traction outside of small circle of people for whom politics and policy is entertainment.

So what’s a candidate to do?

They can start by adopting the language of social media. When in Rome and all that. So that if I were Hillary’s campaign team, I’d go find that meme of her with sunglasses on being all badass and sink a nice chunk of change into it. Keep it authentic and resist the urge to stick obvious talking points in there (no one is going to share those) and then sit back and watch the poll numbers go up. If I were Team Trump, I’d take those “Trump Face” gifs and do the same thing.

This sort of behavior is anathema to the sort of serious people who populate campaign staffs. They’ll feel it diminishes their candidate and makes a mockery out of the whole process. But like we tell brands and celebrities, that conversation is already happening, with or without your participation, so you might as well bite the bullet and join in so you can have some control over what’s being said.
It might make you feel a little sleazy, but it’ll also get you more exposure than #HotDebateGuy. And in a tight race, that could be the deciding factor.