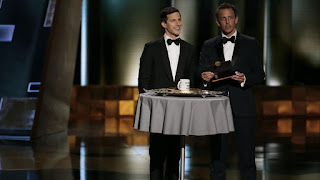 The 67th annual Emmy Awards were last night and host Andy Samberg, looking short-haired and dapper, managed to bring it in on time, to the relief of 11 PM local news producers across the country.
The show pretty much stayed the course, with only a few surprises, but there are three main takeaways for anyone working in the industry.

Ratings Were Down 20% from 2014.
This was perhaps the biggest shocker: ratings are way off from last year despite some very close races featuring some excellent shows. (The best drama category in particular, featured Game Of Thrones, Mad Men, Homeland, House of Cards and Orange Is The New Black, all potential winners.) Our gut says this is in large part due to the wide availability of online clips—rather than invest three full hours in a show, fans figured they could watch the highlights clips online while they were binge watching their favorite shows. Fox also didn’t seem to invest a lot of money in promotions for the event, particularly on social media—most of the ads we saw were from other media outlets touting their live blogging of the Emmys. Using social to create buzz around an event is crucial these days as a way to drive live tune-in and making use of services like Periscope to bring behind-the-scenes action is also a must. But none of that makes a difference if people don’t know you’re doing it, so publicizing your social activity is very important.

HBO Is the New Normal.
Emmy voters are notoriously conservative and the subscription cable networks have not traditionally fared all that well at the show. But this year, HBO took home a record 43 awards. Could it be that, with the streaming services and their non-linear release schedules producing some very buzzed about new shows, that the Emmy voters are starting to see HBO and Showtime as part of the Old Guard? This could be a problem for the broadcast networks in particular, who’ve seen their share of Emmy statues shrink over the past few years and who were limited to a few strategic wins—no big breakouts a la Veep or Game Of Thrones. They’ll need to reexamine to type of programming they’re putting out and decide if they care whether ratings behemoths like Empire (which, to be fair, has received generally favorable reviews) are worth more to them than highly decorated by little watched hits like Mad Men.

The Line Between Comedy And Drama Is A Blurry One.
As the second golden age comes into full bloom, it’s become clear that old formulas are being cast aside. So that the old paradigm by which comedies were sitcoms with laugh tracks and a set pacing and dramas were serious and had violins playing in the background to signal mood shifts is long past. Instead, we have hybrid shows like Orange Is The New Black, whose shift this year from the comedy category to drama is symbolic of the shift. Takeaway for the industry is that these very popular hybrid shows (HBO’s Girls is another one) are mostly coming from the premium cable networks and streaming services and the broadcast networks need to open themselves up to this type of programming.