If You Can’t Beat ‘Em, Join ‘Em: Why Cord-Cutting Has Ceased To Be A Threat 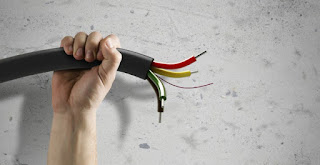 It’s funny how cord cutting, the industry’s biggest bogeyman can seemingly disappear as a threat overnight. Not because of any sudden victory or clever strategy play by the TV Industrial Complex, but rather, because forces have gradually realigned and what was once unthinkable is quickly becoming the status quo.

And so it’s come to pass that no matter how you want to get your TV—streaming services, apps, YouTube or the Titanium Plus All-Channel Cable Package—all options seemingly lead to the same place: your MVPD broadband provider. It’s an easier and more cost-effective solution for everyone to feed off the same ecosystem than to try and create something new. And while viewers may stray from the classic thousand-channel cable TV package, many won’t stray all that far, and many more won’t necessarily stray forever.

Rather than people permanently severing their connection to the MVPDs, what we’ll see instead is people buying alternative packages from those same MVPDs. (Sort of like how supermarket chains now sell the organic food that was once their greatest competitor.) Instead of abandoning Comcast, Time Warner, et al, consumers will turn to them to buy access to streaming services, to individual network apps and to some form of broadband-only service with a skinny bundle and short form videos.

And they’ll do it because it makes business sense for all parties involved.

What’s In It For Streaming Services and Networks

For streaming services like Netflix and Hulu, it makes sense because when they allow the MVPDs to sell their services, they also get a free sales force, a free billing and collections department, and a whole lot of free marketing support. The latter is particularly true for those streaming services likely to be featured in the MVPD’s various promotions (“Get three free months of Netflix when you sign up!”)

If you’re a network launching an OTT app, it makes sense for you to sell your app through the MVPDs too, because of the billing and collection services you won’t have to build and because you’ll have instant access to the 95 million subscribers they have in their respective databases, which, given that you’re building your audience from scratch, is going to seem like a very good deal. And while you may occasionally cannibalize your existing audience, the new Nielsen TAM service will ensure that the views you get on your OTT service will still be counted.

What’s In It For Viewers

While both streaming services and network streaming apps will also make use of services like iTunes and Roku to sell subscriptions, those services can’t offer a single bill for TV and broadband the way the MVPDs can. While this may not seem like that big a deal, if you’re looking at five or six standalone services, plus broadband, the notion of a single bill can be very compelling.

There’s also the prospect of volume discounts, e.g. sign up for six independent services and get the seventh for free. That’s compelling because the networks are unlikely to offer much of a discount on their freestanding apps— CBS All-Access is $6/month, so if you have eight similar apps, that’s $48/month, plus $10 for Netflix, $15 for HBO Now and suddenly your $73/month bill isn’t that small, especially for what you’re getting. If your MVPD can bring that number down as part of a deal that includes unlimited broadband and a landline or cell phone, that’s going to be a lot more attractive than assembling the package yourself.

What’s In It For MVPDs

The MVPDs also stand to benefit from these arrangements. They make their money off of broadband, and the more broadband subscribers they have, and the more broadband those subscribers use, the happier they are. In addition, getting subscribers into their database, even if it’s just to buy a single HBO Now subscription, gives them the opportunity to upsell those customers, get them into the ecosystem and keep them there. That’s why we’re already seeing many (if not most) of the MVPDs introduce some sort of broadband-only service aimed at Gen Z and Millennials (Comcast Stream, Verizon Go90) that bundles traditional television and short-form YouTube-based content meant for consumption on their mobile devices.

A Journey, Not A Destination

The ability to adapt to consumers at various life stages is going to be the key to the MVPD’s success. So while a single viewer in their 20s would likely only need a few subscriptions, maybe to catch up on sports or to binge, when that same viewer settles down and has kids, they’ll likely take a more extensive package to satisfy all members of the family. Again, this may not be today’s traditional cable bundle, but it will include a broad array of options, and, more importantly, bring all the players revenue that’s in line with what they’re making today, whether that revenue comes from advertising, subscriptions or one-off transactions. As we’ve seen in recent months, ad revenue seems to be remaining constant even as the number of viewers goes down, in large part because no other medium offers the same kind of reach.

The Danger Of A Monopolistic System

Before we paint too rosy a picture, it’s worth pointing out the inherent danger of the system that seems to be shaping up: it’s based on a monopoly (or at best, a duopoly) where one company seemingly holds all the cards. Or at least that last mile cord into the home. That’s never a good thing, especially when those MVPDs have traditionally led the list of “America’s Most Despised Companies.” Giving them that much power is not the best idea, but short of government intervention or technological breakthroughs that provide alternate sources of broadband connectivity, there don’t seem to be any realistic alternatives.

As the MVPDs expand the notion of what constitutes “Pay TV” and which services they’re willing to offer, the notion of “cord cutting” will fall by the wayside. Existing networks and other content providers need to adapt to this by understanding that their viewers are on a lifelong journey through the pay-TV ecosystem, with different needs and wants each step of the way. Acknowledging this, and creating options that connect with viewers at each juncture will be the key to their success in the years ahead.

Or at least until the next major shockwave hits.
at 7:17 PM

Labels: Buzzword Of The Month Club, Convergence, Not Everyone Is An Upscale Urban 30something White Male Hipster, The Business