Co-written with Jesse Redniss and originally published at www.braveventures.com. 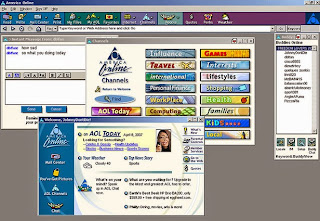 The media has been doing a lot of snickering about Verizon’s purchase of AOL today, because, after all, who actually admits to watching something on AOL or even knowing what’s on there. It’s all so 1998.
Media types may not watch AOL but clearly someone is: over 65 million Americans to be exact. In fact, when it comes to video, Comscore consistently shows AOL a not-too-distant third behind YouTube and Facebook, a fact not unnoticed by ad buyers. While it may not be sexy, it is the future of TV, which isn't about "shows" but about great stories both long and short form, something AOL has in spades.

While the perception may be that AOL is stuck in the “You’ve Got Mail” days (note the number of headlines that will pun off of this today), the reality is quite different: AOL is a sleek 21st century media company that has wide-ranging content deals with everyone from the very successful millennial-focused MCN AwesomenessTV to NBC to the Huffington Post to dozens of other niche creators. It’s that range that makes them so strong: AOL covers a broad spectrum of demos which not only enables consumer choice (do I want to snack on video or do I want a full meal),  it also gives advertisers the breadth and depth they want for better, more focused targeting.
Which is really what the AOL deal is all about: targeting. If there’s an audience segment you want to reach, you can find them on AOL. And if you want a way to deliver it, they’ve got that covered too.
You see, while no one was looking, AOL made the transition from chat room organizer to ad tech powerhouse. With first quarter revenue from their ad tech units well north of $200 million. AOL has bought up a number of technologies like Adap.tv, AdLearn Open Platform, Vidible, Gravity and Convertro, which they’ve recently relaunched under the One by AOL moniker, giving advertisers an end-to-end solution across multiple screens.

Verizon, on the other hand, has a way to serve that up, via its VDMS (Verizon Digital Media Services, a content and ad delivery system that competes with the likes of Brightcove and the Platform.) And while VDMS has yet to live up to its potential, combining that platform with AOL’s ad tech services gives Verizon the ability to serve up ads to whatever segment you want to reach.
That’s just on desktop. The problem AOL, Yahoo and other web-based services have run into is that more and more views are coming via mobile and mobile means no cookies. No cookies means all that sexy ad tech software is pretty much useless, which is where Verizon comes in: as the nation’s largest mobile provider, they have all sorts of data about mobile usage, including the ability to track user identity across devices, which can make those ad tech platforms useful again.
While the tech is clearly driving this deal, it’s AOL’s content play that make it all the more interesting,  particularly if Verizon is planning on using all this new AOL content in its upcoming V-POP (Virtual Pay-TV Operator) play.
Oh right, that.
Verizon’s V-POP is more than just a rumor, it’s something the company has actually announced it’s planning on rolling out sometime this summer and if you look under the hood, the pieces are all there for a really kick-ass system.

There’s the UX piece that they have from OnCue, the failed Intel V-POP they bought last January. There’s the distribution piece from their mobile network (we’re thinking video watched over the Verizon V-POP is exempt from bandwidth caps.) And now there’s the additional content, both short and long form, that they get from AOL to supplement the network content they’ll negotiate through FIOS.
The combination of short and long form content reflects the way people watch video now: a two minute clip on the phone while you’re waiting for an appointment, a sixty minute show at home on the big screen TV. And it’s baffling to viewers why the same company can’t provide them with all of this, why they have to switch inputs, switch apps to go from one to the other.
A fully integrated experience is where the future is going as it gives viewers the option of choosing their own experience, sort of like a Sleep Number mattress: everyone can get the exact bundle they want with the right mix of short and long form content. (Remember Verizon’s recent pick-your-own-bundle fiasco? While ESPN and NBC certainly weren’t happy, the notion of “dialing in” the perfect bundle might just be the secret sauce behind Verizon’s new V-POP service.)
So let’s review what we have here: a strong tech play that boosts the value of AOL’s ad tech products by giving them some much needed mobile juju.  A strong content play that may form the nucleus of the upcoming Verizon V-POP’s broader content strategy. A dial-your-own content bundling option.
Looks like a win from here.