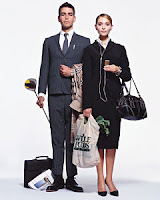 New York Times columnist David Brooks, author of the most excellent BoBos In Paradise, had a fascinating column last week that deserves some exploration from a marketing POV.

Although the column itself was a take on the Hillary vs. Obama contest, Brooks framed it in terms of how our increasingly class-based society has bifurcated retail shopping into two very different experiences.

The first, which he calls "Commodity Providers" deliver just that: the product you want at a low price, no bells and whistles. Brooks uses the Safeway supermarket chain as his example, though just about every industry has its equivalent: Walgreens, Airtran, Holiday Inn.

The second are "Experience Providers" - all the brands I call "Prom King Brands" plus all the other BoBo (Bohemian Bourgeois) faves: Starbucks, Apple, W Hotels, Virgin - where the retail experience is just that: an experience.

They want an uplifting experience so they can persuade themselves that they’re not engaging in a grubby self-interested transaction. They fall for all that zero-carbon footprint, locally grown, community-enhancing Third Place hype. They want cultural signifiers that enrich their lives with meaning.

But I don't really buy that. I think that for this cohort, shopping is just plain entertainment. They have enough money that paying $5 for a coffee drink or $1500 for a laptop computer isn't really that big a deal. And if they're going to be spending their hard-earned money on things, they want to be entertained while they're doing it. Experiential marketers make them feel special. They add a certain value that allows the BoBos to justify the extra $4 they just spent on a Venti Caramel Latte. So in a sense, it's all about entitlement, not guilt.

But either way, what's telling here is how quickly we are moving towards a two-part society. Now mind you, there's no hard line and people will move across the barrier depending on what's important to them or what's more convenient at the moment. But the either/or framework of this division is of great importance to marketers. People seem to want one or the other and to identify with their choice. It's a phenomenon that seems destined to extend beyond the retail industry into just about every sort of product out there. The upper classes get the image-drive experiential products and services while the rest of the population gets the no-frills generics. Psychologically that drives us farther apart than ever, farther apart than Hillary vs. Obama.

one point that was left out was that at the bare bones "commodity providers" you generally have bottom of the barrel to choose from for your purchasing pleasure.

after you top a certain income, you realize that you don't have to buy whatever is on the shelf at the local commodity provider. you can get something that fits better and looks better on you, not because you want to be entertained as you spend money, but because the commodity providers have bottom of the barrel goods, for the most part. that's how they make their profit: volume.

sell X for cheaper than others and you will sell more of X, increasing your revenue. Banana Republic, Kenneth Cole, et al, will sell less at higher price, but deliver a better product.

of course, there are those twits that insist on being waited on hand and foot at Saks or Gucci, but they are always there. those are the ones that fall into the "entitlement" phase and there are those that can't afford to shop anywhere else but Wal*Marts. neither of those should weigh in the calculations.

in the end, i think it's "you get what you are willing to pay for" that rules the consumer roost, not "entertain me with your delightful floor plan and colorful motifs".

Agreed LD-- there's a difference in quality between what the commodity providers give you and the experience providers.

But it goes beyond that. Not every purveyor of upscale goods provides an experience to go along with it.

Plenty of airlines provide a more comfortable seat than AirTran, but Virgin and JetBlue managed to create something of a cult by adding experience. Lord & Taylor sells high-end clothing, but the experience there does not rival Nordstrom's even though the stores have fairly similar merchandise.

The experience providers have added something extra (the experience) that has made them more popular with BoBos, who, I still maintain, feel entitled to be entertained while they shop.

The rich and the poor in America end up with just about the same things, they just end up with them at different times.

Take flat screen TVs. Not that long ago, a 42" plasma TV was astronomically expensive, out of reach for all but a select few. Now they are under $1,000 for top brand name sets.

The same is true with gold clubs - as I found while working at a golf store in high school - some people bought the $400 Callaway driver when it came out...others waited a few months and bought the same thing for half price.

With "things" and "brands" no longer as closely related to class anymore, BoBos had to look for other ways to show off their economic success to others. The more "experiential" purchases - like the $5 Starbucks every day - allow them to do that.

They are past buying "things" since "things" can be bought by anybody (and anyway, the quality difference between top and bottom is less and less every year). BoBos want experiences and brand personalities and shopping experience to give the value that the actual purchase just doesn't anymore.

I read a book awhile back called "Making Meaning," that basically explained how people look for righteous justification for what they already want to do. They tell themselves a story they want to believe.

Folks like us have to create an environment where such connections -- between product/service and consumer's meaning -- can easily take place.

While I don't think all meaning can be assigned to "liberal guilt," at in enough cases to be noteworthy, some meaning can likely be assigned to it (or any other kind of guilt -- God knows - lib'ruls don't have a monopoly on that).

I haven't looked up any statistics, but I would venture a guess that the majority of people with money are older. I've also noticed that older people tend to like more help with things and will pay more for ease of use. That could also contribute to more service type purchases. I think this would fall into the category of what lower depths said.

I think one thing you could talk about to remedy your argument is maybe the advertising for products is Commodity Vs. Experience. That seems to make a little more sense to me.

It seems like there is all this guerilla advertising demonstrating a product attribute. That seems more commodity. Where Ipod doesn't really do that, because it's more about the experience. Of course coke has that whole 'Happiness Factory' thing. I guess it doesn't really matter what the product is, it's just how they're positioned. Commodity Vs. Experience

I agree with the whole liberal guilt thing. I just lent some money to Cambodians through kiva.org and I feel a little less guilty about getting drunk with my friends all weekend.

But yeah, great point and interesting writing as well.

@DB: Good point about the trickle-down theory of luxury goods. Even trends, like the whole green thing, eventually get translated for the masses. Making experience all the more important.

@Cam- I will have to check out that book, sounds interesting. The column I referenced is quite short- Brooks is an op-ed columnist for the Times. He's an engaging writer, and whether you agree with him or not, he does make you think. I also give him points for not taking the world quite as seriously as some of the other Times columnists do. He's also avoided becoming a parody of himself, a fate that's befallen many of his peers.

@Ross: While it's true that there are many well-off seniors, many of the products in question- Starbucks, Apple- are aimed at 20 and 30somethings (and there are plenty of well-off people in those age brackets.)
I'd also venture that the need to feel that your service provider appreciates you and your patronage by providing you with an experience is something that appeals more to a younger person who is less sure of his/her status in the world than it is to someone who's been there/done that.
Oh-- and thanks for commenting. Welcome to The Toad Stool. Hope to hear from you again soon.

That idea about younger people seeking the experience because they're less sure of themselves is interesting. It sounds logical. Maybe I'm confusing Experience vs. getting more service.

I was picturing older people on the Queen Elizabeth 2 cruise or something like that, where the experience of luxury is everything.

I have a new question. Is age as a marketing demographic even that relevant anymore? It seems like we can get to know our consumers a little better than that. Look at Dakota Fanning, she's like 45. Than you have Dick Cheney, who is 12 playing with GI Joes.

David brooks is a genius political and cultural commentator. He was a visiting professor of public policy at Duke University's Terry Sanford Institute of Public Policy, and he taught an undergraduate seminar there in the fall of 2006 in which i attended.

I love reading his stuff. I really enjoyed how Brooks framed the Hillary vs. Obama article in terms of how our increasingly class-based society has bifurcated retail shopping into two very different experiences.

Have you read On Paradise Drive: How We Live Now (And Always Have) in the Future Tense?
Its great!