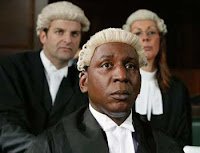 Today's Wall Street Journal has a (free for now) article about the Kafka-esque obstacles lawyers face when trying to advertise their own services... from other lawyers.

The debates are truly mind-boggling: a Syracuse lawyer was dinged for an ad where stranded space aliens hired him as a defense attorney because it contained "patent falsities"

"It cannot be denied," wrote assistant New York Attorney General Patrick MacRae in a court filing, "that there is little likelihood that [the lawyers] were retained by aliens..."

Another debate, this time in Florida, centered on whether lions are acceptable advertising icons, tigers having been deemed unacceptable by the courts for their negative imagery.

For anyone who's had their copy raked over by lawyers intent on finding shades of meaning unfathomable to all but the truly demented, there is no small amount of glee to be found from an article like this. Especially those of you who toil in pharma advertising, where the legal ministrations truly define the term "Kafka-esque"

My brother is an attorney and, as public service to the rest of America, I vowed never to help him with advertising. With this article in hand, I have an excuse why I can't.

Between this and Scamp's debate on truth in advertising, I'm scared.