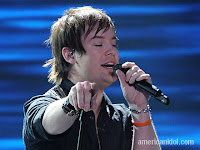 So for those of you following pop culture, the big news this week was undoubtedly David Cook's victory on American Idol.

Unlike his carefully groomed competitor, young David Archuleta, the 25 year-old bartender from Tulsa hadn't even planned on entering the competition: he'd gone to the auditions with his brother and decided to try out at the last minute as sort of an afterthought.

Now his victory has some obvious resonance to me, the accidental blogger. Because I never intended for this to turn into a whole new career path either.

But sometimes success is just a matter of putting yourself out there. It's a lesson that's as valid for pop singers and bloggers as it is for brands.

The new media landscape is filled with happy accidents, like Twitter, a platform with a host of flaws that's somehow succeeded in spite of itself. (For now, anyway.)

The issue for our clients, of course, is that for them, "putting yourself out there" costs cash money. There are no guarantees and it can feel a lot like gambling for someone whose bottom line is under constant scrutiny from other departments.

Our job, as marketing consultants (and I'll include ad agencies under that umbrella) is to convince them that's it's a bigger gamble not to put themselves out there. At a time when first-mover advantage is just about everything, we've got to keep trying out new platforms and new technologies. (Well, within reason, anyway.)

The good news is that most new technology isn't all that expensive to play with. And that even being part of a failed experiment can yield positive results. Both in terms of learning and the PR value that comes with the perception of forward thinking and willingness to experiment.

It's a tightwire act though, one that needs to be consistently monitored and delicately handled. You don't want to be the only one, but you don't want to be a lemming either, stampeding blindly after the next bright shiny object just because "everyone else is doing it."

Find something that works for you though, and the payoffs , as David Cook found out, are well worth the effort.
at 9:42 PM