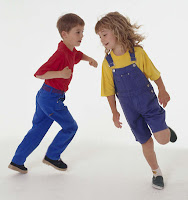 Noah Brier, who is both a strategist for Naked and a real-life friend (as opposed to an online one) has come up with a site that is at once brilliant, useful and fun.

It's called Brand Tags and it's just that: you see a logo, enter the first thing that comes to your head and the results are displayed in one of those tag clouds that no one had really ever found compelling use for beforehand.

It's an evolving project- Noah describes the process here- but it's also a fun game-like experience and is definitely worth a few minutes here and there during the course of your day. The results are at times surprising (e.g. given that the audience thus far is mostly Noahs's young-ish advertising/marketing/internet peers, I was surprised how often the word "Nazi" turned up to describe both VW and Mercedes) but even when they're not it's interesting to see the range of things that turns up. And of course what doesn't surprise me may indeed surprise you.

Have fun and be sure to email Noah with your suggestions on things you'd like to see.

UPDATE: Noah's added a companion site called Celeb Tags which lets you tag Madonna, Paris Hilton and the like. Comparing the tonality differences between the two is pretty fascinating, as The Girl Riot notes here.
at 6:27 AM