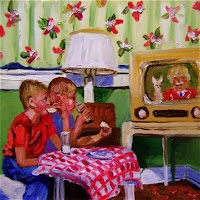 There’s been a lot of talk about the recent revelation that the average network TV viewer is 50 years old. Mostly of the “see—TV is dead, only old people watch it anymore” variety.

But my experience is that it’s not dead—far from it—it’s just fragmented. Because those numbers you keep reading about are just for the Big 5 networks—not for all television networks. And the truth is, kids don’t watch network TV anymore. They watch Disney Channel and Nickelodeon.

Think about it: when was the last time you saw a “family” type show on network television? You know, something like The Brady Bunch, The Partridge Family or even The Cosby Show? Most of network TV today is given over to bawdy reality shows and what I call “leer-coms” – adult situation comedies that (largely thanks to network censorship) are 22 minutes worth of leering, winking and innuendo.

Kids do not like leer-coms. They don’t get the humor and thus don’t find them the least bit entertaining. (Even well done versions of the genre, like Friends and Seinfeld, are beyond the taste level of your average 10 year-old.)

But flip on over to the marketing machines that are the Disney Channel and Nickelodeon, and you’ll find entire blocks of very popular programming aimed solely at the kid and tween demographics. From Hannah Montana to Drake and Josh, these are the shows today’s kids will look back on as the TV utopia of their youth. 25 years ago, these shows would have been on network TV. But thanks to fragmentation and the profusion of 1000+ channel cable boxes and households with multiple TV sets, kids and tweens now have their own channels and their own programming. Which is sad, in a way, because it's just one more thing that's no longer part of a shared national culture.

But not only are kids watching these shows to the exclusion of network TV, they're buying their CDs and going to their movies.

Because as much as these kids are the true “digital natives,” they still like to kick back and let someone else do all the work in terms of entertaining them. And because, just like when we were their age, showing up at school with the ability to discuss popular sitcoms still has valuable social currency.

Now how they watch these shows has changed- everything is DVR’d and time-shifted and a show like Disney’s The Suite Life of Zack and Cody might be on as many as 3 times a day.