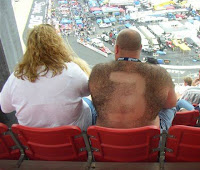 Just four years ago, the playwright Arthur Miller (Death of a Salesman and all that) wondered “How can the polls be neck and neck when I don’t know one Bush supporter?” And so it’s been fairly amusing (to me, anyway) to listen to many of my adland friends react in horror and utter amazement to the news that John McCain is actually ahead in the polls. Or at least not all that far behind. (It depends on whose polls you listen to.) Because after all, no one they know actually supports McCain, and so who are all these people who are allegedly voting for him.

This reaction is a common symptom of something that greatly afflicts people in the advertising community: NASCAR Blindness. Which is the strongly held belief that if no one in your little bubble of upscale artsy BoBo friends is into something, then clearly no one else is.

It’s what lead advertisers to completely ignore NASCAR for so many years, dismissing it as some bizarre redneck affectation akin to eating squirrel meat and thereby missing the opportunity to bond with the millions of middle class fans who enjoy auto racing.

We see it now in the complete dismissal of MySpace as yesterday’s news. Which is yet more blindness to the actual size and passion of the audience that uses MySpace. Listen to digital (and other) creatives, and you’d think that the only reason people are still on MySpace is that they just haven’t bothered to migrate over to Facebook yet. Sort of the same way they haven’t all bothered to finish college and buy Subaru Foresters and Volvo XC70s yet, either.

But as cultural anthropologist Danah Boyd has pointed out, the split between MySpace and Facebook is a class-based one, and those on the lower end of the class divide tend to favor MySpace. Which doesn’t make it worthless or on its way out. It just makes it different. And those MySpace users (whose numbers more or less equal that of Facebook users) are every bit as into and passionate about MySpace as NASCAR fans are about NASCAR. Caveat emptor.

Ditto TV. Ad people and their friends don’t watch a lot of TV, and when they do, they watch it via On Demand, iTunes, DVRs and even DVDs. So the natural assumption is that no one else is watching TV either, that TV is dead and that the popularity of shows like American Idol, How I Met Your Mother, Desperate Housewives and Dancing With The Stars is some sort of fluke fueled by elderly Midwestern couples whose children don’t live close enough to actually show them how to use their Macbooks to get online. And yet, as Bob Hoffman pointed out the other day, TV viewership is actually up 7%.

NASCAR Blindness also causes us to ascribe our tastes and preferences to the rest of America. So we’re shocked when focus group participants in Des Moines don’t know that pinot grigio is a type of wine, let alone an Italian white one. Or when they need to see the word “next” adjacent to the right-facing arrow on a web page to figure out what it is they’re actually supposed to do with it.

Now the remedy for NASCAR Blindness is a relatively painless and simple one: listening. Which is one of the most underutilized tools in the marketer’s arsenal, but also one of the most valuable. And while it’s not our job to blandly recreate all that’s popular in American culture, we do need to bear in mind that when making a sale, it’s best to talk to your customer on his or her own terms.

Labels: Not Everyone Is An Upscale Urban 30something White Male Hipster, Politics