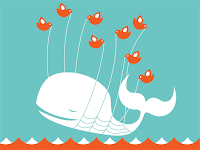 1. THE ABILITY TO REPLY TO DIRECT MESSAGES VIA EMAIL. Right now I receive DMs in my email inbox (whether I have Twitter open or not) but I can’t reply to them via email. This is bothersome in that I then need to log on to Twitter to reply. Or insert the person’s actual email address and reply to them via email, which they may or may not be checking, given that they contact me over Twitter in the first place.

2. THE ABILITY TO SEE MY FOLLOWERS/FOLLOWEES IN ALPHABETICAL ORDER. This should be simple enough. And there are so many times I find myself wishing I had this functionality. Is John @JSmith or @JohnSmith or @JohnSmith2008? Is Mary @maryconner or @ maryconnor? This is especially key if I'm sending a DM and don't really want some stranger to accidentally learn details of my financial dealings.

3. THE ABILITY TO INSTANT MESSAGE PEOPLE. This would replace the usual pattern which is to send a series of DMs. If I’m already in Twitter and I need to find out something either private (what you really think of so-and-so’s new blog post) or banal (did you get the email I sent you and is Thursday at noon okay?) we can DM each other, but DMs don’t get delivered right away and wind up in my email inbox and don’t make for quick conversation the way IMs do. I’d even settle for IMs limited to 140 characters or less.

4. THE ABILITY TO RESPOND WHEN I’M ABLE. This is something Twitter gives me now and I’d like to keep it that way. Twitter, unlike, say IM or Facebook, doesn’t let my friends know if I’m logged in or not. So there’s no expectation that I’ll respond to @ messages or DMs instantly. This is a real joy, because it lets me use Twitter at my own convenience without the pressure of feeling like I’m insulting someone because I haven’t responded to their message. It also keep the feeling going that Twitter is like an ongoing cocktail party or water cooler conversation that I can wander in and out of at will.

5. THE ABILITY TO ADD FOLLOWERS VIA TWHIRL AND OTHER THIRD PARTY APPS. Okay, this is pretty minor, but I figured I should have five things on my list;) I only follow people once I’ve gotten to know them. And I usually get to know them via Twhirl. It would be easier to be able to follow them via Twhirl than to have to open up my browser and find them all over again.
at 11:03 AM