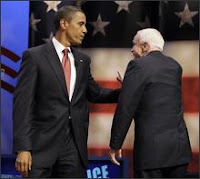 So the Service Nation Summit, held last night at Columbia University here in New York, turned into far more of a debate than I’d anticipated.

Yes, both men kept their promise to be polite and respectful towards each other. And yes, as my friend, education reform advocate Whitney Tilson pointed out, both men had fairly similar stances on the issue. But the tone and the timbre of the question and answer session was clearly a preview of what we can expect to see in the upcoming debates.

John McCain was first up and he stayed on script and on point the entire night. His script was simple: I am the experienced bipartisan get-along-with-everyone guy whose “maverick” reputation came about because I do the right thing, regardless of what my party is telling me to do.

And so McCain did not miss a single opportunity to mention a Democratic senator he’d cosponsored legislation with. Bayh, Feingold, Kennedy—he spent a good two minutes telling us how much he loved Ted Kennedy— and kept emphasizing how these guys were his friends. Not Bush and Cheney.

Which is part two of the McCain message: I am NotBush. So there was Bush bashing and Congress bashing in his message. (The laugh line of the night, for example, came when McCain said that given the 94% disapproval rating, the only people who still thought Congress was doing a good job were “staffers and blood relatives”)

McCain also scored points by thoughtfully answering questions about the military: when asked about how to make the military a more attractive career to those from the upper economic strata, he pointed out that although Columbia had allowed Iranian president Mahmoud Ahmadinejad to speak on campus, ROTC recruiters were still banned and then called on them to end the ban. (A point Mr. Obama later reiterated, much to the surprise and delight of many in the audience, depending on where they stood on the issue.)

Obama, on the other hand, got off to a rocky start. The first comment out of his mouth was a joke about how the neighborhood around Columbia had changed so much since he’d been in college that he could no longer afford an apartment there. There was much groaning in the press room over that one, since this is clearly not the case.

Obama, as Doug Meacham pointed out to me in a tweet, is not as effective one-on-one as he is in a speech, and he began to ramble, going into excruciating detail about his programs and confusing everyone as to what he was actually talking about. He strayed from his message of “I am the postmodern JFK, the guy who can re-energize the country and bring us back to hope and optimism” by getting bogged down in the minutiae rather than sticking to the broad strokes.

He did recover though, about midway through, when he began talking about the military and his plans for expanding the definition of military service to include jobs in civil engineering, agriculture and even education. That seemed to be his turning point and he really came to life when he spoke about the value of public service and it was clear from his tone and his body language that this was something he felt strongly about. He went on to garner the biggest applause line of the night when he said that it was his job to “make government service cool again.”

Obama also ended on a high note, giving his popular campaign speech about how change needed to come from the bottom up rather than the top down, a message that drives home his post-modern JFK positioning.

Overall, I’d say McCain did the best job of staying on point and sounding empathetic and presidential. He is clearly at ease in these sorts of events and it’s easy to see why the “Town Hall” style debates are so compelling to him: clearly, that is McCain’s sweet spot while speechmaking is not. With Obama, it’s quite the opposite: he’s much better working a crowd than one-on-one.

Something the McCain camp needs to watch is that their man doesn’t stray too far into his “Good Time Charlie” persona that his message starts to clash with that of the party at large and Sarah Palin in particular. For Obama, my fear would be more nebulous: he needs to be careful that McCain doesn’t sound like the CEO of a large and powerful corporation while he’s left sounding like the head of a small, hip start-up, the kind where people wear flip-flops to work and bring their dogs to the office. (To wit: While Obama authentically feels very strongly about public service, he needs to realize that not everyone shares what’s often perceived as a youthful passion and he can’t assume that they will.)

The real winners tonight though were the American public. They got to hear smart, well-thought out questions from the moderators: Time magazine editor Richard Stengel and PBS correspondent Judy Woodruff and serious answers from the candidates. Woodruff and Stengel quoted de Tocqueville and used PBS-esque phrases like “American exceptionalism.” It was fascinating (in a good way) to see how the more highbrow tone of the questions changed the level and tone of the debate.

All in all a positive evening. Thanks again to Christina Kerley (CK) for bringing me there and to David Berkowitz and David Reich for joining me.

Sidenote: For those linguists in the audience, one of the more interesting moments was hearing the 50something Stengel use the word “dissing” in a question he posed to the 70something McCain.
at 10:02 AM