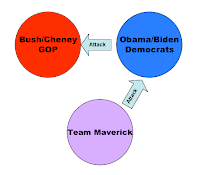 If my criteria for voting centered on which candidate had the best marketing strategy, the newly rechristened “Johnny Mac” would win in a heartbeat. Because the end-run he’s done around the Democrats this week has been nothing short of brilliant.

By setting himself up as the leader of what he’s essentially playing up as a new third party—Team Maverick—he’s completely taken the wind out of the sails of all the anti-Bush sentiment on display in Denver last week.

Let Obama and Biden attack Bush and Cheney all they want. Team Maverick doesn’t necessarily disagree. I mean isn’t the not-so-subtle message that Johnny Mac is called a maverick because he doesn’t agree with Bush/Cheney either?

Neither Bush nor Cheney was anywhere near the convention this week. And when people finally started to tune in, the two people they heard speaking were Fred Thompson and Rudy Guiliani. Two other “mavericks;” neither of whom is closely associated with Bush/Cheney and all their baggage. Palin never mentioned either of them and I suspect McCain won't either when he speaks tonight.

From a marketing perspective (and we are talking marketing here- not politics) it’s the equivalent of introducing a spin-off brand that operates separately from the main brand and goes in a completely different direction. Sort of what Pottery Barn did with West Elm when people felt PB was too staid/expensive or what Toyota did with Lexus for the opposite reason.

And I say “sort of” because people are less invested in brands than they are in politics, because neither Pottery Barn nor Toyota had the negative baggage associated with Bush/Cheney and because it remains to be seen whether McCain and Palin can get Americans to believe that Team Maverick is indeed a separate brand.
at 10:41 AM