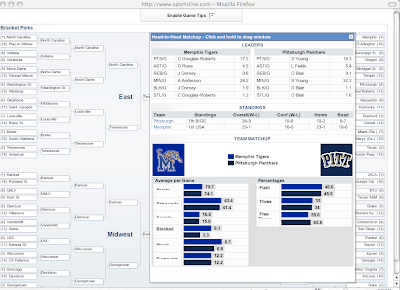 If you recall, I installed four different March Madness* apps on Facebook last week and had the basketball-obsessed eldest Tadpole check them out.

His preference for the CBS Sports app was reinforced yesterday as we filled out the brackets. Not only was the interface more intuitive and easier to use, it was the only one to feature pop-ups. Mousing over a team's name calls up a brief overview of their strengths and weaknesses with the option to see a daughter window that highlights some key match-ups. (See screen cap above.) This is particularly useful since even a basketball-obsessed Tadpole is not intimately acquainted with the strengths and weaknesses of all 64 teams.

More updates to come as the tournament begins.

Sidenote: There's something very Facebook about all four apps. I mean as compared to MySpace. Maybe it's the nature of a bracketed tournament, but they all seem to mimic Facebook's clean lines and easy functionality.

*"March Madness" refers to the annual NCAA men's college basketball tournament that's become wildly popular in the US.
at 7:02 AM