The Breakfast Habits Of Complete Strangers. (And Other Things I Don't Like About Plurk.) 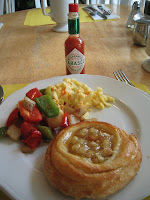 While I’m still willing to give it a chance—it’s way too early in the game to write it off—I’ve been completely underwhelmed by Plurk, the newest Twitter competitor that’s become all the rage.

A lot of it depends on how you like your microblogging. For me, it’s a way to connect with friends in a business-social kind of way. That means I may discuss a project I’m working on, but not the gory details of my dental surgery.

It also means that I don’t follow back people I don’t know. (Or at least people I don’t know of.) I don’t care what hundreds of complete strangers are having for breakfast. If strangers want to follow me, that’s their prerogative. But I have enough trouble keeping track of the people I know.

Which is my problem with Plurk: I have to spend way too much time wading through conversations between people I don’t know about things I don’t care about.

On Plurk, unfortunately, I am.

Plurk shows me comments from people I’m not following if they happen to comment on one of my friend’s threads. So I have to wade through those root canal and what-I’m-eating-for-breakfast conversations between total strangers. It’s an odd feeling, like you accidentally opened someone else’s personal email.

I’m also not digging the timeline UI and the lack of freestanding app, but I can get over those in due time. The conversations from strangers? Not as quickly.
at 10:37 AM