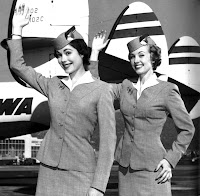 So the talk this time of year, on the lush green playing fields and crystal blue pools of my leafy upscale burb is of summer vacation plans.

And even the most upscale of my neighbors are talking about how avoiding an airplane trip is at the top of their agenda.

Every conversation is identical: the virtual doubling of airfares coupled with what's perceived to be the complete disintegration of service has lead people to find ways to avoid air travel.

And for many of my neighbors, it's not even a question of money-- it's perceived value, or lack thereof.

A summer airline trip is now seen as nothing more than a series of all-but-guaranteed lines and flight delays followed by hours in a cramped uncomfortable cabin with surly service and no guarantee of making it to one's destination remotely on time. Cross country flights, which were once the province of spacious 747s are now flown by small single-aisle planes where even the first class seats seem like coach.

So if you're an airline, that's either a kick in the ribs or an opportunity to prove you understand your customer's pain.

Because if an airline were to run a campaign that was honest, that took the position "hey, things have gotten a bit rough, prices are up, delays are more frequent, we'll do what we can to make it up to you," I suspect that campaign would resonate with consumers in a big way.

Anyone who's been on an airplane lately knows that all that all the usual happy talk is just wishful thinking-- even airlines like JetBlue and Virgin Atlantic who normally do a great job are at the mercy of lengthy security lines, overscheduled flight patterns and erratic weather conditions. So a little honestly would go a long, long way.