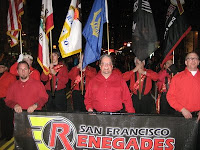 The other day a traditional ad guy I know was talking to me about a mutual acquaintance, whom he called a “really good digital ad guy.”

Now I’ve been around both types to know that the subtext of “a really good digital ad guy” is “he turns our print ads and TV spots into banners without messing with the headlines too much or changing the color palette and layout.”

It most decidedly did not mean “he really understands the medium and what’s possible online and comes up with technologically innovative solutions that extend the brand, not the TV spot.”

And that brief exchange really crystallized a dilemma facing our industry now. It’s something David Armano alluded to in this Ad Age piece (where he tried to ruin the word “tradigital” for me—thanks Dave!): Big TV-centric agencies (and the clients that employ them) have gotten used to the fact that there’s now a “digital” component to whatever campaign they’re doing. Only their rigid interpretation of “digital component” is a bunch of flash banners that expertly mimic the print and TV campaigns and a microsite that may or may not have an actual reason for being (e.g. a contest) but “looks really cool.”

Now partly, that stems from a core lack of familiarity of what digital is. Too many senior agency and client marketing types have only a cursory understanding of the interwebs, gleaned from their occasional visits to cnn.com, YouTube and a half-day seminar about Facebook. But mostly, it stems from a willful act of self-preservation. By clinging to a world where TV is still king and digital is just another way—like direct mail—to repurpose the elements of the TV campaign, they ensure both their longevity and their power. For if history has taught us anything, it’s that ruling elites do not relinquish power easily.

In fact, it generally has to be pried from their cold, dead hands.

Since mass murder is not a real option (for me, anyway) I’d like to suggest a less bloody solution: reframing these responsibilities within the creative department. So that rather than keep an entire department of low-paid, low-value “banner boys” on staff, we turn responsibility for banner creation over to the same teams that create the print and the TV. I know a few agencies (mostly smaller ones) currently do it that way, but most don’t, especially the shops that have invested heavily in so-called “interactive departments.” I mean a good headline writer is also a good banner writer. And figuring out simple flash animation isn’t brain surgery. (Or so you would think—I’ve been adamantly refused the services of guys I knew who were killer headline writers by recruiters and CDs who gasped “but they’ve never done digital!!” as if banner writing were some sort of art form that could be mastered only after years of intense study.)

Microsites are a little more complicated, but can also be done by the general team after a few hours with a good IA or UX person. Who hopefully will help them find a raison d’etre for the site that doesn’t rely on the words “so we can win awards.”

And let's not forget the TV-spot-masquerading-as-a-viral-video-because-the-client-has-no-money-for-TV. Easy enough to figure out who gets that one.

That frees up the digital team tremendously. It allows them to hire people whose idea of “good creative” isn’t based on TV-centric advertising award show criteria, but on what actually makes sense in the medium in 2008. People who realize that the new gold standard is to create something entertaining, useful and media/site appropriate and who know that The Real Digital Revolution has changed the rules of the game and put the consumer in control.

Those people would make “really good digital creatives.”
at 5:21 PM