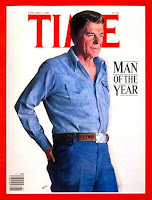 I was reading something by a conservative strategist about how the Republicans need to re-examine their current positioning and it hit me that their biggest problem—regardless of what you think of their policies—is that they’ve become the party of “no.”

I mean they’re pretty much against everything: terrorism, ending the war in Iraq, gay marriage, abortion, universal health care. Whether you agree with them or not, it's just one big “no” after another.

And while they’ve been smart enough to try and spin their positions to something positive (e.g. anti-universal health care becomes pro-free market health care) the spin phrases have not caught on with the general public. Even those who strongly support their positions tend to frame them in terms of “they’re against X.” So the Republicans of the ‘00s have found themselves in the same boat as the Democrats of the ’70s: they’re the Debbie Downers of their day, constantly finding something that can’t be done or isn’t right or doesn't work.

And while Ronald Reagan and Barack Obama may seem to be at opposite ends of the political spectrum, one key trait they share is the ability to focus on an upbeat, big picture message. Hope. Change. Possibility. Leave all the messy wonky issues on the back burner. Think about it: the main charge hurled against both men by their opponents is that they lack substance. That they’re all charisma and charm with little to back it up.

And without getting into the subjective truth or falseness of that charge, we should look at the objective truth, which is that the Reagan/Obama big picture messages really seem to resonate. That people want to hear about amorphous things like hope and possibility first and the granular nuts-and-bolts ways we plan to achieve them second.

Now the lesson in there for marketers (you knew I was getting to that) is about the need to focus on the big picture. To pick one broad, positive point of differentiation and own it and to stop worrying that “anyone in the category can own ‘fun.’”

Anyone can, but if you get there first, you do. And if it's not "fun" it's "delicious" "smart" "healthy" "fast" or a whole host of easily grasped adjectives.

It’s especially important now, during The Real Digital Revolution, when customers have their own ways of finding out the wonky details about your product and rely on your advertising and marketing messages (including design) to give them a broad macro sense of what your product is all about. How it feels, not how it works.

Are you about boring granular details? Or are you about big broad-stroke messaging? If it’s the former, then people aren’t going to see your product or service in the right light. This is especially true in areas like packaged goods where the granular details (20% creamier!) are likely only of interest to the product team itself. It’s a little less true in sectors like B-to-B, where details matter, but again, the more you can create a clear, easy-to-pass-on, single-minded brand message that’s consistent across all media, the easier it will be for your customers to relate to you.

And once they’re relating to you, the details are a lot easier to swallow.
at 6:00 PM