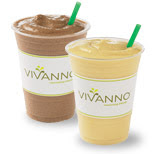 “Nourishing” is one of those words that always makes me cringe. It’s a perfectly fine word, mind you, but it’s so overused in the world of marketing, as to lose any real meaning. I mean few words so succinctly call up the notion of mom, love, food and warmth in such a glib and facile manner.

So as a general fan of Starbucks, I was very disappointed to see that they’re currently pushing something called “Vivanno Nourishing Blends.” Which are nothing more than sugar-laden milkshakes with some protein powder added. They’re certainly not “nourishing” or even particularly “nutritious.” And at 270 calories for a 16 oz. grande Banana Chocolate Blend Vivanno, they’re only adding to the obesity epidemic. (By comparison, a similarly sized regulation Mocha Frappuccino is only 260 calories, sans whipped cream-- and the "light" version of the same Mocha Frap is just 140 calories.)

Now I’ve got nothing against milkshakes and ice cream and candy and other foods of little-or-no nutritional value. In moderation, anything is fine. It’s just that by calling them “nourishing blends” Starbucks is giving the overweight tacit permission to indulge in something that’s not all that healthy for them. I mean it’s pretty easy to see people sucking down two or three of these a day because they’re “nourishing” versus the Frappuccino, which is clearly a coffee-infused milkshake.

It’s also too bad because I’m sure I’m not the only vaguely health conscious Starbucks customer who looked at something called a “Chocolate Banana Blend” and thought “'nourishing,' my ass. These people are lying to me.”

Which is more of a problem for Starbucks than most other marketers. You see Starbucks built their reputation on being a kind-to-employees, community-minded, social activist company. The kind of place where, when they told you the coffee came from small farms and the profits from the water were going into some sort of fund, you believed them.

The sort of place that wouldn't call a sugar-laden milkshake "nourishing."

It also smacks of the kind of marketing tricks that downscale companies use to try and get one over on their (presumably less sophisticated) consumers. And as Starbucks becomes more mainstream and less urban sophisticated, the trickery of Vivanno Nourishing Blends is going to turn off their more upscale customers, the ones who were already on the fence about how middle-of-the-road Starbucks was becoming. (Witness the recent brouhaha over the introduction of Pike’s Place and subsequent lack of bold flavored coffees.)

This is just a bad move for them, albeit one that could have been avoided by a slight change in marketing tactics.
at 1:13 PM