Remember those Terry Tate, Office Linebacker ads that came out of the unlikely bowels of Arnell, the fashion ad agency whose notoriously unlikeable founder, Peter Arnell, also pissed off Adland with his über-fashiony Samsung campaign about 10-15 years ago. (The ones with beautifully lit shots of über-buff models holding gleaming white microwaves tucked under their arms and the like. (See example below) I seem to remember one of the One Show Crew (Gary Goldsmith?) writing a scathing article in some ad trade or other about how putting appliances in fashion ads wasn't an idea and that said, it wasn't even a very good execution. So there. Nonetheless, the ads got noticed and Samsung is not longer the bottom feeder it was back then. Which admittedly may have everything to do with improvements to their product line and nothing to do with the ads.)

Anyway, it seems the even more unlikely creator of "Terry Tate" is a guy with the Thurston Howell III-esque name of Rawson Marshall Thurber. Mr . Thurber (Marshall-Thurber?) is a graduate of USC film school who'd made a series of short films featuring the aforementioned Terry Tate that came to Mr. Arnell's attention and were thus made into Reebok Super Bowl ads. (WASSSUPPPPP!!! anyone?)

So today's Times has a big honking article on the front of the Metro Section (as opposed to metrosexual) about how some struggling actor and former actual dodge ball champion (who knew?) was suing Mr. Rawson Marshall Thurber. Because it seems that Mr. RMT went on from Terry Tate to write and direct the Ben Stiller oeuvre "Dodge Ball." Which the struggling actor claims was stolen from his dodge ball movie script. (You can't make this shit up.)

You all need to read the article-- the reporter, William Glaberson, has a lot of fun with it.
Also worth reading: The Wikipedia article on those Terry Tate spots, wherein all sorts of really vulgar sexual puns buried within the plot are exposed. 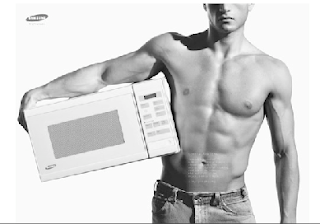