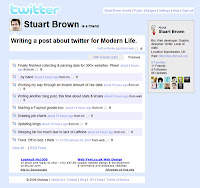 Today’s New York Times reports on how reporters have discovered a use for Twitter, one of the new microblogging sites that allows you to broadcast messages up to 140 characters long. It seems several reporters “embedded” on the campaign trail have been Twittering their immediate impressions of events as they happen. John Dickerson of Slate.com is one of them and you have the choice of reading his Twitters on the Slate site or of electing to follow him on Twitter and receiving his updates on your phone or Blackberry.

The trend, which the Times is calling “microjournalism” is one of the first valid responses to the oft-asked question about Twitter: Why would anyone want this? And while 2008 presidential election coverage has a 9-month lifespan, I can easily see microjournalism finding a ready audience among sports fans.

As I’ve noted before, one of the more interesting things about new technology is watching the ways people take them and make them relevant and useful. It’s why the best response to new technology is not scorn but a watchful eye to see where (and if) the popular zeitgeist will take it.
at 11:43 AM