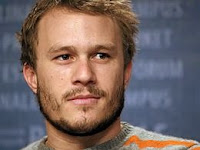 So if the details around Heath Ledger's death prove to be true, we could be in for a serious re-examination of the Cult of the Celebrity.

Even the New York Times is reporting that the masseuse who found him was so afraid of ruining Ledger's reputation and creating a scandal that she called his girlfriend Mary-Kate Olsen several times before calling 911. And that Ms. Olsen's response was also to avoid 911 and all costs and to send over a private security flack.

Now it may just have been that neither woman thought he was in mortal danger. But if the spin on this story is that Heath Ledger died because celebrities are afraid to even seek emergency medical care because of the way the press swarms around them and amplifies their issues to unmanageable heights, then Ledger may wind up being seen as a martyr to the Cult of the Celebrity and the whole gossip industry may be called to task.

Or the spin could just be "if you can't stand the heat, get out of the kitchen" and our sympathy for the travails of multimillionaire actors will last the proverbial 15 seconds.

Though my optimistic nature keeps thinking that something will free us from our obsession with anyone and everyone who's ever had a camera pointed at them.
at 9:37 AM

honestly, aren't there bigger things to care about? leave this sort of thing to People or Rolling Stone...

let's talk about the media blackout on Darfur, or why this administration won't deal with Pakistan as a threatening nuclear presence instead of giving them financial aid ...

not to be hard-hearted, i know he left a little girl but ... let's leave the papparazi to their task and not aid and abet ... just one man's opinion.

@LD: I'd argue that every inch of press devoted to Paris Hilton is one less inch devoted to Darfur.

The media is still an eyeballs-based business and if those eyeballs are inclined to read about celebrity misbehavior, then more serious issues get pushed to the wayside.

Too many blogs and not enough food, this is what we’ve seen.

i used to be SERIOUSLY into celebrity news and gossip around 2000. couldn't get enough. couldn't figure out why either. not so much these days. OK, i may have the perezhilton.com widget.

but one thing i did notice was that just as my obsession started to wane, the mainstream media got way into it. it went from being a guilty pleasure to news somehow. i think it's a function of easy ratings (fox news!) coupled with the fact that it's cheap. no actual newsgathering required.

let's just ask people how they FEEL about Heath Ledger's death and pretend it's news.

love this. montel williams. who knew?

Eyeballs mean level of interest and the interest is in the latest celebrity scandal.

This fall, ESPN, and Sunday football anchors on the networks were getting all caught up with the Tony Romo/Jessica Simpson romance.

i agree. there are plenty more important news items than the latest britney shite. and the state of american tv news is abysmal and embarrassing. it was always a bit weird with its fixation on (deep voice) "the news anchor". but now it's gone beyond even the movie "network".

but cnn and fox and abc and nbc and cbs are all owned by major business congomerates. you think these guys just let their news divisions get on with reporting whatever they want?

well most blatantly in the case of Fox, ahem, News it clearly isn't the case. and increasingly the others are following suit.

it's like they're hiring their news reporters from the gap. CNN has rendered itself irrelevant. they couldn't even hold a dignified presidential debate. and how was letting lou dobbs speak his tiny mind on air ever a good idea?

i just mentioned to a young A.D. at the shop today about the tragic death and circumstances concerning heath ledger... his response"

no. he didn't just come back from a shoot in Turkmenistan. just not your typical celebrity news junky, i guess.

I remember where I was when I heard that Kennedy was shot, of course.
I also remember where I was when I heard that James Dean was killed in a crash.
The other night, watching the SAG awards, I learned that Dabbs Greer died. He was the character actor who played Tom Hanks as a 108-year old man. He wondered at the end when he would die; I guess he made it to 117.Don't know about Mr. Jingles, if you saw the film. Check out Green Mile--Cast and see this guy's credits.
I always wondered what roles Dean would have gotten; now I'll wonder what Ledger will have missed, not to mention the great Dabbs Greer.
R.I.P.

After reading a few more responses, I remember I was changing the plugs on my '68 Chevelle when the radio said Belushi died. TV had it later, followed by all the papers and mags the next day. It was shocking for me as a fan, but when I heard about Ledger, it didn’t resonate nearly the same amount.

Not sure what I’m trying to say here other than maybe something about who you connect with is specific to your own generation, or maybe having so many media outlets to report things nowadays means we just don’t have a buffer to let it all sink in.