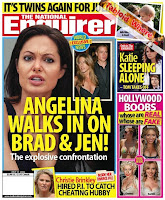 So last week, two friends of mine, David Armano and David Griner, each found themselves riding on the swell of a story that was riding the media wave, rolling from one publication to the next. Armano had written a list of parody "Web 3.0" buzzwords (which started as a Twitter thread and became a blog post) and links to it have wound up just about everywhere, including USA Today. Griner, a blogger for AdFreak, was interviewed by ABC News about RickRolling and his quotes are now popping up in the UK newspaper The Times.

The power of seemingly insignificant stories like these to sweep through the media has precedent in the pre-internet era. To wit: Years ago, a good friend of mine, Justin Martin (who went on to become a prominent journalist and author of the seminal biography of Alan Greenspan) had an unusual living arrangement: he rented an apartment in Manhattan from a man who used it as an art studio during the day. Since the artist was a retired executive for whom art was a hobby, the arrangement worked out on both ends, though Martin did have to keep the apartment fairly neat.

Well, a friend who was a reporter at The Wall Street Journal did an article about the unusual arrangement. Which was picked up by a few other newspapers around the U.S. A few weeks later, however, Martin came home to find a Japanese TV crew parked in front of his apartment. They were there to do a segment on him and needed him and the artist to re-enact a few scenes for the camera, which took the better part of the following day. (So much for authenticity.)

But the best was yet to come.

A few weeks after the Japanese TV crew left, Martin got a call from a reporter at The National Enquirer. Who asked a few seemingly innocent questions and promised that the story would the following week.

It did. With a 72-point type headline "Naked Women Are At My Apartment All Day, But I Can't Be There!" (The artist, it seems, had painted a few nudes over the years.)

Aside from the complex physical connections that make up its infrastructure, the Internet is facilitated by bi- or multi-lateral commercial contracts (e.g., peering agreements), and by technical specifications or protocols that describe how to exchange data over the network. Indeed, the Internet is essentially defined by its interconnections and routing policies.

As of December 30, 2007, 1.319 billion people use the Internet according to Internet World Stats. Writing in the Harvard International Review, philosopher N.J. Slabbert, a writer on policy issues for the Washington, D.C.–based Urban Land Institute, has asserted that the Internet is fast becoming a basic feature of global civilization, so that what has traditionally been called "civil society" is now becoming identical with information technology society as defined by Internet use. - web design company, web designer, web design india

Martin's a very good writer. I read his book on Ralph Nader too. Too funny that you actually know him!